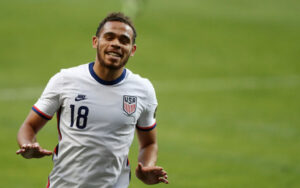 The U.S. men’s U-23 team is heading to the Olympic Qualifying semifinals. Jason Kreis’ men won in a second-half scoring frenzy against the Dominican Republic, with all four goals being scored in the second half.

Jackson Yueill kicked off the scoring-fest in the 61st minute, flicking in the ball with his back heel. Hassani Dotson scored twice in the 73rd and then five minutes later in the 78th minute. The Minnesota United midfielder used his right foot at the top of the penalty area to slot the his first goal in net. Then, in the 78th minute, Dotson used his right foot again, but at a sharp angle, smashing the ball into the far-side netting.

Djordje Mihailovic put the final nail in the Dominican Republic’s coffin in the 90th minute. However, it was Benji Michel that did the work, sliding in his cross to Mihailovic at a slanted angle.

Mihailovic had two assists, both on Dotson’s goals.

The win puts the United States U-23 men at six points. A clash with Mexico is on the docket for Wednesday night. The Mexicans will take on Costa Rica tonight, with the winner surely finding themselves in a good spot to advance. If Mexico wins, the U.S. and Mexico will advance to the semifinals.