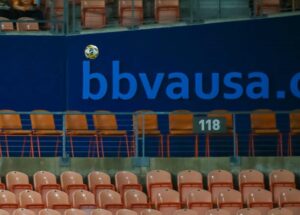 HOUSTON – Colorado Rapids headed to Texas on Saturday night to play Houston Dynamo. The Burgundy Boys won all three games against the Dynamo in 2021. Danny Wilson returned looking to second the backline. This match would prove to be climactic with Tyler Pasher playing the hero for a Dynamo team looking to reestablish themselves.

The first half had plenty of positive player, but shooting opportunities were limited. Center backs from both side made quick and good decisions under pressure. Danny Wilson and Daniel Steres stood out.

Jonathan Lewis had the first good look on goal 11 minutes in. Off a great cross from Keegan Rosenberry, he took a touch then shot. Goalkeeper Steve Clark dove to his right to make a great save. Later in the half, Michael Barrios had a similar chance from the top of the box, but Clark was able to control.

Colorado went up 1-0 in the 42nd minute off a vaunted set piece. Jack Price delivered an inswinger. Wilson got a slight touch, beating Clark to the ball. It went to the far post and Mark-Anthony Kaye tapped it in. The half ended 1-0.

42′ Goal #Rapids96! It’s another set piece goal. Price with the service, Wilson with a possible touch, then Kaye with a tap in. #HOUvCOL | 0-1 | #MLS pic.twitter.com/Br0lTJcEBE

The Dynamo started the second half with urgency. After nearly getting a shooting opportunity off the kickoff, Ferreira’s best chance came on an open header in the 49th. He put it over the bar. In the 54th minute, Quintero dribbled past three defenders before turning the ball over. Emergency defending from Colorado’s back five again was Johnny-on-the-spot.

Houston had most of the ball and chances in the final 20 minutes. Maybe the most exciting moment for Colorado was center back Auston Trusty making a run forward that led to a breakaway. He flubbed his chance with Clark easily collecting the ball.

The match seemed destined to be a Colorado win. But in the 90th minute, goalkeeper William Yarbrough gave the ball away on a goal kick. Memo Rodriguez laid the ball off to Tyler Pasher who scored. The match ended 1-1.

90′ Tie game in Houston! Tyler Pasher scores off a give away off a goal kick! #HoldItDown #HOUvCOL | 1-1 | #MLS pic.twitter.com/T93StagkpA

Tyler Pasher at the death: Pasher got his first goal of the season and it was a gift. It might have been the bounce Houston needed given how the night had gone for them. It was an opportunistic play by two players (Rodriguez and Pasher) looking to impress their new head coach. It was a really bad and decisive moment for Yarbrough.

Ferreira snake bitten: It’s been a tough start to the season for Paraguayan. He’s had looks on goal, especially in this game. He showed his frustration in his body language when subbed off in the 60th minute.

Set pieces again: Colorado scored their second straight goal on a set piece. They got into good areas from the run of play but did not convert those into good looks on goal.