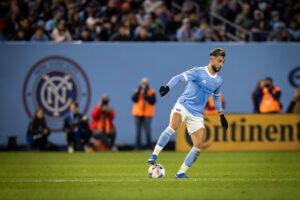 San José, Costa Rica – Two early goals from the 2021 MLS Golden Boot winner, Valentín “Taty” Castellanos lifts NYCFC over AD Santos in the first leg of a best of two round of 16 matchups of the Scotiabank Concacaf Champions League.

Picking up where they left off in 2021

NYCFC would find the first opportunity of the match in just the fourth minute with a threaded ball in from Castellanos to the foot of Talles Magno. However, the ball was blocked by the Santos’ keeper Kevin Ruiz and out to Maxi Moralez. Moralez was able to create another shot on goal again saved by Ruiz before eventually being cleared.

In the fifth minute of play with NYCFC dominating the early attack, a ball in would see a Santos defender called for a handball and Taty Castellanos sent to the PK spot for NYCFC. As he did all throughout 2021, Castellanos buried the shot with a slight touch from Ruiz and put NYCFC in the lead 1-0.

On target from the jump

NYCFC continued to win on the offensive despite a few counterattacking chances for Santos, even taking a counterattacking opportunity of their own in the 21-minute off the back of a Santos attack. Catching up to an over-the-top ball, Santiago Rodríguez dribbled two defenders on his way to the touchline and played a ball back across the box for Moralez. It’s here that a shot on goal from Moralez created something physically impossible by deflecting off the goal from both sides of the crossbar somehow?

In spite of the missed opportunity, NYCFC continued to possess the ball well and in the 30-minute would find a second breakthrough when a chipped-in ball from Rodríguez found Malte Amundsen running down the wing. A cross from Amundsen bounced around the box eventually finding the right foot of a wide-open Castellanos who easily placed it for goal number two.

Picking up right where he left off

NYCFC would close out the half with one last chance as Castellanos found Moralez on the wing in the 46-minute for a quick pass to Talles Magno who had a step on his defender in front of the net but touched the shot just onto the post before it was cleared out of bounds.

The Bronx Blues opened the second half with a 53-minute chance as a great pass from Moralez caught the run of Castellanos for a one-on-one with Ruiz that was saved by the keeper.

However, this would be followed up in the 68-minute with a red card awarded to Santiago Rodríguez for a foul that was surely a yellow card but questionably a red sending NYCFC down to 10-men.

Regardless of the red, Ronny Deila was able to keep his side well-disciplined and despite a few turnovers in the final third from Sean Johnson and Maxime Chanot, the defense was able to limit any chances for Santos.

A few substitutions for NYCFC saw the debut of designated player Thiago Martins as the center-back who helped to sure up the win for NYCFC following a fairly quiet second half.

Last Word: Onto the second leg

With a great performance by @tatycaste11anos , @NYCFC took an important win from San José

Santos was missing a few key attackers in this matchup due to COVID protocols and will most likely have them back for the away leg but seeing NYCFC off to a 2-0 lead is very reassuring. Santiago Rodríguez will be missed for the next leg as his offensive output was noticeable throughout the first half but should see maybe Thiago Andrade step up in his place.

Being up 2-0 heading into the home leg (if you can even call it that with the game being played in Los Angeles at Banc of California Stadium) will be a huge advantage for the reigning MLS Cup Champs. While MLS clubs haven’t recently had much success in Concacaf’s Champions League, NYCFC will want to be the first club in years to find some and showed that with an early-season win in Costa Rica.