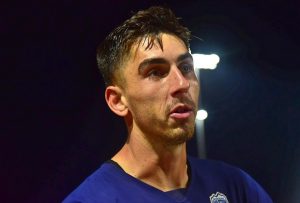 Hailstorm settling in in Severance behind Trevor Amann hattrick

Hailstorm took it to the visitors in the first half. They loaded the box on set pieces. Direct play saw players get behind the high line for chances on goal. North Carolina got forward by playing out of the back, but only managed a shot on goal. Lachlan McLean got things started in the 15th minute. Northern Colorado won a free kick 10 yards from the corner flag. Arthur Rogers whipped the ball in to six yard box. McLean knocked it down then finished.

Trevor Amann made it 2-0 in the 31st. McLean delivered a great ball over the top. Amann ran onto goal and picked out the far bottom corner, beating goalkeeper Will Pulisic. Hailstorm made it 3-0 in first half stoppage time. Again on a set piece, Rogers found the head of McLean. Pulisic made a great save on the goal line but Amann was there to tap in the rebound.

The pride of Westminster, Colo. with his first professional brace

The second half was more balanced with North Carolina trying to get back into the game. Nicolás Molina hit the post on a set piece in the 67th minute. Oalex Anderson had a chance on a breakaway but couldn’t get a strong shot off. He was livid to not get a penalty called.

Amann completed his hattrick in the 79th minute. Substitute Jackson Dietrich drew a penalty on a sequence between the two. The keeper got a touch to the shot from Amann as it deflected top corner, making it 4-0. Rogers was set to take PKs that night but the coaching staff told players to have Amann take it once the ref made the call.

“I walked up to him and I said ‘Trev, get your hattrick.’ He said ‘no, it’s part of the process. The older guys get to take the penalties.’ I was really happy he ended up getting to take it. I’m buzzing for him. First pro hattrick,” McLean said post game.

North Carolina pulled one back with a penalty of their own. Garrett McLaughlin converted it bottom left corner. The match ended 4-1.

Settled in at home: Hailstorm have won back-to-back games for the first time in club history. This was easily their best home performance of the year. They’ve now played their fifth home at Severance HS. They now are settled with a consistent training ground and home stadium for the rest of the year.

“It’s been inconsistencies on the pitch, off the pitch. We’re starting to feel more of a rhythm with our training ground and playing here. Back-to-back wins now. It’s coming at the right time” head coach Éamon Zayed told Last Word.

Amann breaks out: Amann now has five goals on the season. He’s had chances this year, but has been unable to finish. This might be the performance he needed to go on a run and help Irvin Parra, who was suspended for this game, with goal scoring.

“I’ve gotten a lot of chances this year. It’s relieving to see the ball hit the back of the net. Eamon’s been saying to me, once one of them goes in they’re all going to go in,” Amann told Last Word.

“It’s been coming. He’s hit the post. He’s missed some chances. I challenged Trevor and Lachlan to score some goals. Both of them were excellent. [Trevor] was due a game like that. Hopefully he continues now,” Zayed added.

Playoff seeding implications: With this win, Hailstorm now move into the sixth and final playoff spot. It’s a tight playoff race in USL League One with fourth through ninth separated by three points. With this loss, North Carolina are now nine points out. It’s likely a six horse race for those final three playoff spots. Every team has a game or two in hand on Northern Colorado. They need every result possible going forward.

“We’re in the position we’re in. We need to win games to make playoffs. A lot of the guys are out there playing free. We’re going for it,” Amann added.