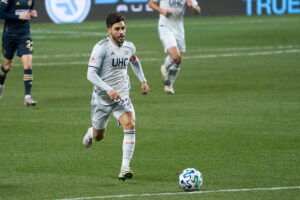 CHESTER, PA – There was mass drama between Nashville SC and NYCFC with Dax McCarty and Maxi Moralez both seeing red after a heated exchange. That wasn’t the only red card action in MLS last night though as Arnór Traustason was given his marching orders at Subaru Park. Even with the Revs’ man being dismissed, Bruce Arena’s side hung on for a huge three points away from home. This was a big one between the reining Supporters’ Shield holders and the champions-elect.

Both the Union and New England fielded weakened sides in this one due to their various international commitments. Amongst the absentees were both starting goalkeepers, Matt Turner and Andre Blake, the former is with Gregg Berhalter’s USMNT whilst Blake, along with Cory Burke, is representing Jamaica.

From a Rev’s point of view, it was good to see both Luis Caicedo and Carles Gil back in the matchday squad. In their place, Kaptoum, Polster, Traustason and McNamara filled up the middle of the park. On the flip side, Jim Curtin was still able to field Kai Wagner, Ale Bedoya, Leon Flach and Kacper Przybylko, so Philly should have been winning this one on home turf really.

The early spells of the game lacked any real quality, both sides being weakened was evident in truth. It took a half-hour or so for the breakthrough and it was the first clear chance at Subaru Park. Matt Polster back in the team was found by Traustason at the back post from a free-kick. He lost his man and poked past Bendik to give the Revs the lead, 1-0!

Traustason went into the book and then, just moments later, with an hour on the clock, shut down a Union attack illegally.

Traustason of Iceland brought down fullback Nathan Harriel and gave the home side a golden opportunity to get back into the game. Stand-in goalkeeper Brad Knighton continued to maintain the advantage for his side even after the dismissal of Traustason. He has always looked perfectly capable when deputizing for Matt Turner but it is hard to challenge the best keeper in MLS for the gloves.

Shortly after the red, Andrew Farrell was seen passing over the captains’ armband which could only mean one thing. THE RETURN OF CARLES GIL! The Spaniard entered the fray in the place of Wilfrid Kaptoum, which was a welcome sight to all in the New England camp.

Philly kept pushing for that allusive equalizer only to be met by the league-leading Revs and their disruptive antics. There were a number of different time-wasting tactics deployed with centre-back Henry Kessler at the heart of this. He was spending as long as he could on the deck and it came to a head when he disposed of all balls insight (as shown below). There were some late skirmishes off the back of this but no further red cards.

Philly’s chances at grabbing a result:

It finished 1-0 at Subaru Park and what a win this was for New England. Polster scored the only goal of the game via a Traustason assist but Traustason saw red also, intensifying the pressure on his teammates. Both sides were without big players but the Revs were worse hit in truth and not just due to international duty.

Traustason will miss the next New England’s next home game which comes against NYCFC on September 11 at 7:00 p.m. ET. However, NYCFC players Jesus Medina and Maxi Moralez are suspended for Ronny Deila’s side following a heated defeat at the hands of Nashville. The Revs keep marching on!

The post Traustason sees red but New England still come out on top; 1-0 @ the Union! appeared first on Last Word On Soccer.