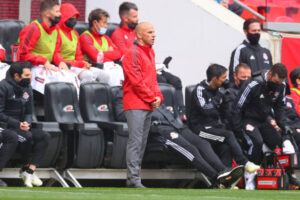 PREVIEW – Chris Armas was only appointed as the Toronto FC manager at the start of the season but his time in Canada, a.k.a. Orlando, has come to an end. The new era will get underway against the Revs who have struggled in their last couple of games which, after a sensational run, is to be expected. One team is competing for top spot in the Shield standings whilst the other is just trying to keep their playoff hopes alive, who will rein victorious in this one?

Armas’ final game in-charge was a 7-1 obliteration at the hands of Hernan Losada’s D.C. United and it proved to be the final straw with the powers that be clearly having had enough. TFC did go down to ten men but Zavaleta’s dismissal wasn’t until the 78th minute, when D.C. had already beaten Alex Bono four times.

This was the sixth game in a torrid run of losses and given that, with all due respect, two of the defeats were against Nashville and Cincinnati, it did seem something had to be changed, Chris Armas losing his job being the outcome. Losing to the likes of Orlando and defending MLS Cup champs Columbus is hardly embarrassing but it all adds up, and a side that won both the cup and the shield just four years ago being bottom of the overall standings is simply not good enough.

A new manager bounce (in the wake of the dismissal of Chris Armas) could see TFC take points away from Gillette Stadium, especially given Bruce Arena’s men failed to win in their last two outings. They lost down south against FC Dallas courtesy of a Ricardo Pepi brace before then blowing a two-goal lead in the first ever fixture at Lower.com Field. They played a part in opening the Crew’s new stadium and with Tajon Buchanan and Gustavo Bou scoring for the Revs in the first half hour, a draw would have been more than good enough for Caleb Porter’s side.

It would be hash to judge New England on the last two games given how good they were prior. They picked up where they left off after the international break, beating the two New York sides 3-2, Gustavo Bou being on target in both. This Eastern Conference clash will pit top spot against the rock bottom side and even with Chris Armas being moved on, it seems hard to see anything besides the Revs getting back to winning ways.

Carles Gil is certainly in MVP-worthy form so far this season and he, along with Seattle’s Raul Ruidiaz and Chicharito, not to mention Gil’s teammate Matt Turner, could potentially walk away with the award.

Talking of Turner and it may be unusual for a goalkeeper to win this award, but to date his form has certainly warranted it. Given the form of Gil and Turner, the speed of Buchanan, the goalscoring ability of Bou as well as the experience of names such as Andrew Farrell, the Revs truly are a force to be reckoned with as it stands.

Bruce Arena is blessed with a fairly clean bill of health and has been for most of the season, something which couldn’t have been said for Chris Armas, did that contribute to his downfall? The injuries to last season’s MVP Alejandro Pozuelo have seen a huge drop off in the creativity levels for TFC, and there have been issues on a goals front in general.

Jozy Altidore is a legend of the league and the USMNT, but he failed to see eye-to-eye with the former manager and that saw him shutout. Aye Akinola got even more of a shot off the back of this and has been strong to date, especially given the aforementioned lack of a true playmaker. Thus, he could certainly thrive if he plays alongside Pozuelo, Soteldo, Jonathan Osorio and so on…

There is a lot of negativity surrounding TFC at the moment and whilst you can’t ignore that their base is at the opposite end of the continent, thousands of miles away from family and friends, they’re not alone in this. CF Montreal and the Whitecaps are also working out of the States in these turbulent pandemic times and have done so to much more success than Toronto, especially when you take into account the relativity of the infrastructure and also the quality of players.

With the likes of Richie Laryea, Justin Morrow, Marco Delgado, captain Michael Bradley and the center back pairing of Mavinga and Gonzalez, even in Pozuelo’s absence they should certainly be doing so, so much better than they currently are.

New England would be expected by most to arrest a two-game winless streak by collecting the three points but with Chris Armas now gone, this Toronto squad could be re-energized and as unified as ever. Even with this boost on and off of the field, anything but a Revs victory seems unlikely given Arena’s know-how in the league as well as the sheer quality at his disposal.