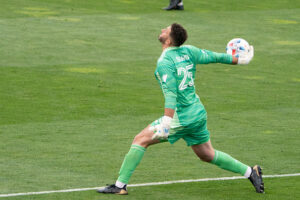 Toronto FC wins the Trillium Cup against defending MLS Cup champions Columbus Crew SC. However, Toronto’s defensive woes and a bad start to the game led to their second-straight loss in MLS play. As a result, Columbus took a two-goal lead at the end of the first half. It was enough for Columbus as they ended up taking the 2-1 victory over Toronto at Historic Crew Stadium in Columbus, Ohio.

Toronto did not take advantage of their opportunities with 12 shots, but only three shots on goal.#CLBvTOR | 2-1 | #MLS

Columbus had nine shots and six of those shots were on target. They were much more efficient shooting the ball than Toronto, who had trouble getting shots on target. For example, in the first half, Columbus had three shots on goal, with two of them resulting in goals.

21′ #Crew96 player Gyasi Zardes scores! His shot from the centre of the box goes into the back of the net. Pedro Santos was credited with the assist. #CLBvTOR | 2-0 | #MLS pic.twitter.com/ShCYbWMuQz

In the 21-minute, Pedro Santos made a terrific cross-pass to Gyasi Zardes. Zardes did an excellent job making contact with the ball and putting the ball into the back of the net. Lucas Zelarayán also had a shot on goal in the 31’ minute that was stopped by Toronto goalkeeper Alex Bono.

There was poor marking between Kemar Lawrence and Auro Jr. according to TSN presenter Julian De Guzman on the first Columbus goal. Auro was also too high in positioning in a Toronto set piece. This allowed Luis Diaz to make a terrific run and easily get through Toronto’s defence. As a result, he was one-on-one with Toronto goalkeeper Bono. Diaz beat Bono and put the ball into the back of the net. It was a goal that Toronto cannot give up if they want to compete for the MLS Cup this year. This is especially true against teams like the Crew.

TSN commentator Steven Caldwell mentioned that there was too much space in the middle of the park in the first half. Columbus took advantage of that space and scored their second goal shortly afterwards in the 21-minute.

Toronto FC did not take advantage of their opportunities

In the ninth minute, Ayo Akinola’s shot from the right side of the box missed to the left. Nick DeLeon would then get two chances in the 17 and 36-minute. However, Toronto was unable to find the back of the net. They in fact did not get a shot on goal in the first half. This played a role in Toronto’s loss against Columbus.

Excluding the two shots on goal that led to Toronto’s lone goal in the game, Toronto only had one shot on target in the second half. The shot on goal came from TFC captain Michael Bradley, who had his shot stopped by Columbus goalkeeper Eloy Room. It is hard to win a game when one cannot get the shot on goal. Toronto learned that lesson yesterday against Columbus.

It is also important to note that Columbus got in more dangerous positions to score than Toronto. It meant that Columbus was the better team at the end of the day and Toronto was second-best.

Richie Laryea may not have gotten the assist, but he played a major factor in the goal. Laryea once again used his speed to get a shot on goal, which was stopped by Columbus goalkeeper Room. However, Room gave up a big rebound which went to Akinola. Akinola took advantage and shot the ball into the back of the net. TFC won the first game of the Trillium Cup rivalry earlier this month. In that 2-0 TFC win on May 12, Bradley played a critical role in Toronto’s win, netting one goal in the game against Columbus.

It is a bittersweet day for Toronto soccer fans. They now have only five points in seven games. Toronto also has the third-worst record in the Eastern Conference. A big reason for that is the inability to keep a clean sheet and being unable to score the first goal of the game. They have given up 12 goals so far, which is the third-highest for goals against in the Eastern Conference.

Yes, Yeferson Soteldo is injured for Toronto. Having him and Jozy Altidore (who is not playing because of a rumoured run-in with Toronto head coach Chris Armas according to Neil Davidson of The Canadian Press) might have helped Toronto to get a result against Columbus. On the bright side, Toronto won the Trillium Cup against Columbus. Hopefully, this serves as a motivator as they will not play until June 19 because of the international break. Also, Alejandro Pozuelo made his first MLS season appearance this year as he came into the game in the 55-minute.

Toronto will next play against Orlando City SC. The game will take place at 7:30 p.m. ET. The game will be televised nationally in Canada on TSN. Orlando fans can also watch the game on Fox 35 Plus. Columbus’s next game is also on June 19. They will face the Chicago Fire FC at Historic Crew Stadium at 7:30 p.m. ET. Fans can watch the game on MLS Live on DAZN and WGN-TV.