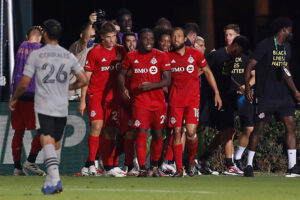 León is in this tournament because they were second in the 2020 Torneo Clausura season before the season was suspended because of COVID-19. They also won the 2020-21 Liga MX season and are the defending Liga MX champions.

Ángel Mena is leading León in the Mexico Torneo Guardianes in 2021 with five goals. This is closely followed by Víctor Dávila with four goals. Jean Meneses leads the team with five assists. This is followed by William Tesillo with two assists.

Mena is a player to watch for León. He scored eight goals in 10 games in the 2020-21 Liga MX season. Furthermore, Luis Montes was tied for fourth in that same year in assists. For Toronto, these are the players to watch out for. León is currently eighth in the Liga MX Torneo Clausura. They have five wins, two ties, and six losses. However, they have started to play better as of late. They are currently in a three-game winning streak and a four-game unbeaten run.

For Toronto, this tie will be difficult to win. Despite this being León’s third appearance compared to Toronto’s eighth appearance in the Concacaf Champions League, they are the defending Liga MX champions. They have also played 13 games into the Liga MX season while Toronto has only recently played two preseason games against Columbus Crew SC. and Inter Miami CF (USL team/reserves). Toronto won both preseason games. This is what Toronto head coach Chris Armas said about the situation.

“I think it’s pretty safe to say that we will not be at our optimal level fitness-wise. We’ve had to play catchup (in training), I think that’s pretty clear.”

Part of that could be some TFC players testing positive while training in Canada in February. It is also unfortunate that Toronto cannot play at home against León. The second leg will be played at Kissimmee, Florida in the U.S. They will not play at BMO Field in Toronto, Ontario because of the ongoing COVID-19 pandemic.

The players to watch are Ayo Akinola and Richie Laryea. Laryea, who could join fellow Canadians Cyle Larin and Atiba Hutchinson with Turkey club Besiktas, should be one of the few players that are in good shape for Toronto. He played two competitive games for the Canadian men’s national team last month. Laryea was tied for third in most goals and fourth in most assists in the 2020 MLS season.

This is while Ayo Akinola was tied for first for most goals as a Toronto player. He has really developed into a great player last year, which included scoring a hat-trick against the Montreal Impact (now CF Montréal). Lastly, there is Alejandro Pozuelo who won the 2020 MLS Most Valuable Player Award. He was involved in almost 57.6 percent of all Toronto’s goals last year in the regular season. In 2020, he led MLS in assists and tied first for most goals as a TFC player.

León currently has no injuries listed. They will be heading to the Champions League with several players at their disposal. This unfortunately is not the case for Toronto. TFC head coach Armas talks about the reasons why this is the case:

“We’ll be at full strength soon, but we’ll go into the first leg (in Leon) with a couple of guys out.”

It is fair to say that Armas said these injuries are minor. However, these injuries could play a big role in the result of this Concacaf Champions League matchup, which is only two games.

This is going to be a tough game for Toronto to get a victory. MLS teams have historically had difficulty winning in Mexico. In Toronto’s case, they have shown the ability to do that in the past. For example, in the 2018 Concacaf Champions League Final leg 2, TFC won 1-2 against C.D. Guadalajara in Mexico. Unfortunately, for Toronto, they lost in penalty kicks to Guadalajara in 2018.

It is important to note that Toronto was in great momentum in 2018. In 2017, they won the Treble: MLS Cup, Supporters’ Shield, and the Canadian Championship and was looking to win the Concacaf Champions League. In 2020 Toronto had an excellent regular season, but fell off near the end of the season and lost early in the playoffs to Nashville SC.