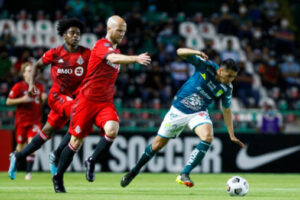 Estadio Leon, a venue that hosted the 1986 FIFA World Cup hosted an exciting match between Toronto FC and Club Leon. The first leg ended up in a 1-1 draw between both teams. Club Leon was the better team in the game and maybe should have come away with the win.

However, that should not take anything away from Toronto FC. They played very defensively and as a result gets an important away goal in the first leg.

Toronto FC made some great plays at Estadio Leon. Omar Gonzalez made a great play in the 42 and 82 and 90 + 2 minute of play to prevent Club Leon from scoring. There was also Patrick Mullins who made a vital interception to prevent a sure Leon goal in the 86 minute. This is just some of the plays Toronto had that helped them earn the tie against Leon. TFC blocked four Leon shots within the game. This included two blocks seen late in the game. They also had the same number of shots on goal compared to Club Leon after the first half.

Club Leon had 18 shots compared to Toronto’s five shots. Even with the shots on goal, Leon led Toronto five to two. Yes, Fernando Navarro Morán’s goal was spectacular and unexpected.

However, Leon had other chances in the game that they did not capitalize. For example, William Tesillo had a chance to score in the 16-minute. Most notably in the first half was Tesillo, whose shot was just off-target. Even though Gonzalez might have played a role in Leon not scoring a goal in that play. Then in the 57-minute, Joel Campbell hit the post. Finally, in the 82-minute Ángel Mena had a chance to win the game at close range but missed the target. The last chance Leon had was in the 90 + 4-minute of play where Morán’s shot was stopped by Alex Bono.

Leon’s Andrés Mosquera Guardia committed an own goal. This was through an unfortunate touch of a Gallardo pass that was meant for Jozy Altidore. However, Erickson Gallardo played a big part in Toronto’s game-tying goal. He stripped the ball from a Leon player and tried to pass it to Altidore.  This as mentioned before was deflected by Guardia and beat goalkeeper Rodolfo Cota for the game-tying goal.

While Gallardo did not score a goal, he played a big role in Toronto getting the tie. It is a shame that Gallardo was not able to finish the game as it looked like he picked up an injury late in the game.

Both Toronto injuries happened around the same. First Jozy Altidore got injured while running. And a few minutes later Gallardo got tackled and had to be carried on a stretcher.

While both injuries are concerning, Altidore is the one TFC fans should be worried about. There was no contact made with a Leon player and seemed to have gotten an injury while running. Hopefully, both players will be back soon and playing a big role in Toronto’s MLS season this year.

Estadio Leon is a very important venue in Canadian and Mexican soccer history. Estadio Leon was one of the venues of the 1986 FIFA World Cup. It also hosted all three of Canada’s only FIFA World Cup games in 1986.

The game was not of the same significance, but it was an exciting game to watch. Toronto performed admiringly well, despite not having a competitive game since November. This is while Leon already played thirteen games in the 2020-21 Liga MX Clausura season. This included playing six games since March before facing Toronto in the Concacaf Champions League. TFC also got the all-important away goal against Club Leon.

As good as a Toronto FC performance as anyone could have imagined. Fantastic collective effort. Earned the chance to get breaks. So many top performances. Auro vs Mena was tremendous, Bradley immense. In current format 16 of 17 teams to score away & not lose 1st CCL leg advanced.

Kristian Jack, soccer analyst for OneSoccer, was impressed by the play of both Auro Jr., and Michael Bradley. He also stated that 16 of the 17 teams in the current format that does not lose and score an away goal advances in the Concacaf Champions League. This statistic could bode well for Toronto heading into the second. However, it is important to remember that they will not be playing at home in BMO Field but in a neutral venue in the U.S. This is because of the ongoing COVID-19 situation.

The second game will take place on April 14 at Osceola Heritage Park. It will be on 6:00 p.m. ET at Kissimmee, Florida. Just like the previous game, this game will also be shown live on OneSoccer.