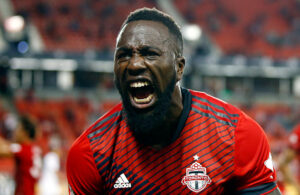 Toronto FC returns to BMO Field with a point against Orlando City SC. Both teams had many chances to score and failed to convert on them. However, TFC did have the better chances, which should have been enough for the win.

This was probably Orlando’s best chance to score beside the goal they scored. Justin Morrow made a heads-up defensive play to prevent Chris Mueller from getting a shot off. Luckily, it did not go into the net and only hit the post. In the 11-minute, Nani’s shot from a free-kick was off-target. Kyle Smith shot in the 20-minute was off-target and Nani’s shot in the 42-minute was easily saved.

They got a few more chances in the second half. Most notably, in the 83 and 89-minute. In the 83-minute, Nani got himself into a dangerous position to score, but his shot was off-target. The biggest chance late in the game was in the 89-minute for Orlando, but Andrés Perea shot from the centre of the box missed.

Toronto FC had nine shots with three of them on target. However, there were some shots not registered that probably could have or should have got into the back of the net. This includes two notable chances to score in the game. The first one came in the 35-minute when Yeferson Soteldo (who was excellent all game long) stole the ball and gave a terrific pass to Dom Dwyer, but Dwyer was unable to get a shot off. Dwyer should have gotten the shot off quickly as it was in a dangerous scoring position.

The other time was in the 44-minute when Tsubasa Endoh was unable to make contact with the ball. Michael Bradley gave him an excellent cross and if Endoh made contact the game would be 1-0 Toronto.

There was momentum leading up to the goal in the 72-minute. Soteldo’s shot in the 57-minute missed and Pozuelo’s shot in the 69-minute was just a bit too high. Furthermore, Jozy Altidore replaced Dwyer in the 64-minute.

Justin Morrow made a terrific cross into the centre of the box. This is where Altidore used his strength to get a terrific header off and put the ball into the back of the net. It was 1-0 Toronto. It looked like the momentum was all for TFC with only 18 minutes left in the game, until Orlando tied it a minute later.

A Lions player shot the ball deep into Toronto’s half. It was an easy one for Auro Jr. to handle. Unfortunately, Auro Jr. was unable to control the ball. Benji Michel then was one-on-one with goalkeeper Bono. Bono made contact with Michel without touching the ball. This resulted in a penalty and a yellow card for Bono.

Nani took the penalty. It was not the most convincing penalty as Bono got a lot of the ball. The ball, though, deflected off Bono and went back into the net in the 77-minute. The TSN announcers were saying this was the eighth time TFC has given up a late goal in the last 15 minutes of play.

Before we get into the overview, everyone at Last Word on Soccer wishes Lions player Sebastián Méndez a quick and speedy recovery. He got injured in the 14-minute and was forced to leave the game.

Yes, TFC needs to play better defensively if they want to compete with the best in MLS. The more important thing though is the fact that BMO Field once again can host MLS games. Because of COVID-19, TFC did not host games at BMO Field since September 1, 2020. Also, the last time before Saturday that they hosted a game against an American MLS team was on March 7, 2020, at BMO Field. This was against New York City FC.

From us to you:

It was a special moment for everyone involved with TFC. Yes, Toronto would feel like they should have gotten a better result. This paled in comparison though to the moment of the day. Many sacrifices by the frontline workers in Toronto made this moment happen. The other positive was that all three Designated Players – Altidore, Soteldo, and Pozuelo, all played today. This was something that really had not happened much or at all this season.

Toronto will hope to create that experience on Wednesday. They will once again play at BMO Field against the New York Red Bulls on July 21 at 7:30 p.m. ET. They will then end the month on the road at Soldier Field against the Chicago Fire FC on July 24 at 8:00 p.m. ET. Both games will be televised nationally on TSN1, TSN4, and TSN in Canada. Lastly, both games will be shown on ESPN+.

This is while Orlando’s next game will be at home against the Philadelphia Union on July 22 before travelling to Yankee Stadium to face New York City FC on July 25. Orlando’s last game this month will take place on July 30 against Atlanta United FC.

The post Toronto FC returns to BMO Field in a 1-1 tie against Orlando City SC appeared first on Last Word On Soccer.