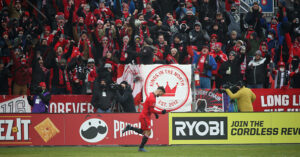 TORONTO, ON – Toronto FC picks up a 2-1 win over New York City FC. This was because of two first-half goals that made all the difference as Toronto beat a struggling NYCFC 2-1 to pick up a second win on the season and make it back-to-back victories for TFC.

Toronto FC picks up a win over struggling NYCFC

New York starts strong but falls before half

NYCFC would begin the match on the attack and in the 8-minute would have a breakthrough on a perfectly played ball from Santiago Rodríguez between three Toronto defenders, which found its way into the path of Talles Magno.

As Magno chased down the ball into the box, he was just barely clipped by Kosi Thompson with the contact causing Mango to trip himself up. With a penalty originally awarded to the away side by referee Drew Fisher, a look to VAR would change the call canceling out the NYCFC penalty despite the contact.

Ultimately, a decision that Fisher acknowledged personally to NYCFC head coach Ronny Deila as a mistake and the Professional Referee Organization called “a significant officiating error”.

With play finally resuming, NYCFC continued dominating on the offensive showing chances first in the 13-minute when Maxi Moralez played a ball across goal that was cleared off the line by Shane O’Neill before a follow-up from Magno was saved by Alex Bono.

After this, it would be an 18-minute ball from Chris Gloster behind Toronto’s defense to Valentín “Taty” Castellanos. One-on-one on goal and being chased by defenders, Taty Castellanos put the shot just wide perhaps with some guidance from Bono to keep the score level.

The next opportunity would come somewhat against the run of play in the 31-minute as Toronto’s Jonathan Osorio received the ball in a pocket of space about 20-yards outside the box. With pressure on the way, Osorio manages a stunning pass between two New York defenders for Jesus Jiménez who slots it home beyond Sean Johnson for a 1-0 TFC lead.

It wouldn’t take long for Toronto to strike again winning a 43-minute free-kick outside the right edge of Sean Johnson’s area. A floating ball from Alejandro Pozuelo into a mix of red and blue jerseys would find the head of NYCFC defender Thiago Martins for an unfortunate own goal putting Toronto ahead 2-0 just before halftime.

Toronto FC close out the win despite a consolation goal

NYCFC would mark the start of the second half with a substitution, debuting 20-year-old Brazilian Gabriel Pereira.

Not waiting to make his mark, Pereira would play a role in the half’s first opportunity as he collected a touch pass from Moralez and dancing around the edge of the box played a quick back-and-forth with Castellanos. After receiving the ball back, Pereira would turn and play a pass to Moralez on the left side for a low drive into the box just touched on by Taty but grabbed up by Bono.

For Toronto, the two best opportunities of the half came from 21-year-old Jordan Perruzza. In the 71-minute, Perruzza dribbled up against Martins and found some space for a shot just outside the box that couldn’t be held by Johnson almost leading to another chance. Perruzza would follow this in the 91-minute with a shot, again from outside the box which whistled just over the post leaving Johnson frozen in the net.

With NYCFC offering a quick counter-attack to Perruzza’s shot, the ball would find its way to Alfredo Morales deep in the midfield who lobbed it into the box for a running Héber to get a diving header and a shot on goal, ending the game with a 2-1 scoreline in favor of Toronto.

Last Word: Where is the offensive output from NYCFC?

While some will look back on the missed penalty call from the referees and blame that as the reason New York dropped a point, the real question should be is what’s going on offensively with this team in MLS?

Outside of the Concacaf Champions League, NYCFC has scored in just two of the five matches they’ve played. They have earned just one win which doesn’t seem like the stats for a squad that won MLS Cup last season and returned the league’s 2021 Golden Boot winner. But for the most part, this team hasn’t looked bad and they even led Toronto in shots on target and possession just without finding that end product.

I understand Ronny Deila’s team is playing an absolutely loaded schedule right now and might be neglecting MLS somewhat with Champions League hopes, but NYCFC is going to have to figure out how to balance both the league and cup a little better in the coming days.

This is while Toronto FC picks up back-to-back wins. They will travel on the road to face Real Salt Lake at 8:00 p.m. ET on April 9. The game will be shown nationally in Canada on TSN and also be shown on KMYU.

The post Toronto FC picks up a win over NYCFC to make it back-to-back appeared first on Last Word On Soccer.