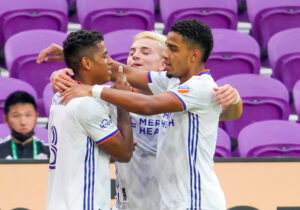 Toronto FC loses 0-2 against FC Cincinnati at Exploria Stadium in Orlando, Florida. It was the fifth-straight loss for Toronto as they remain near the bottom in the Eastern Conference.

Toronto loses again in a 0-2 loss against FC Cincinnati

Full Game Summary:#FCCincy had more scoring opportunities in the second half.#TFCLive‘s defence did not play well against Cincinnati.

Toronto FC did not take advantage of their scoring opportunities in the first half.#TORvCIN | 0-2 | #MLS

Toronto FC’s defence was not sharp

It is no secret that Toronto has given up the most goals in all of MLS. That fact remained true against Nashville SC on Wednesday and it remained true on Saturday against Cincinnati.

The goal would later be changed to be in the fourth minute instead of the fifth minute by MLS. Regardless, it was not a good goal to give up. Marky Delgado gave up the ball. Cincinnati player Isaac Atanga then gathered the ball. He made a terrific through pass to Allan Cruz and once again Toronto was behind early in the game.

Toronto’s defence did not look sharp against Cincinnati. There were times when the defensive line was too high or that everyone was not aligned. This forced players like Laryea in the 43-minute and Michael Bradley in the 45+1-minute to step up defensively.

Toronto FC had chances to score

It is true to say that TFC did have chances to tie the game in the first half. They were two particular plays where Toronto could have scored.

35′ So close! #TFCLive player Patrick Mullins with a terrific chance to score, but his shot was off-target.#TORvCIN | 0-1 | #MLS

Their first real chance came in the 18-minute. Cincinnati goalkeeper Kenneth Vermeer made a terrific save on a Delgado header. This was thanks to a great cross from Canadian Richie Laryea. However, it has to be said that Delgado’s header from very close range was too straight, allowing Vermeer to make the save.

The other chance in the 35-minute though definitely should have gone into the back of the net. Patrick Mullins had a golden opportunity to score thanks to a Dom Dwyer pass, but his shot was high and wide.

FC Cincinnati had the better chances in the second half

Cincinnati’s first chance in the second half came in the 57-minute through a set-piece. Luciano Acosta creates a terrific cross through a set-piece and Álvaro Barreal gets the ball. Fortunately for Toronto, Barreal was not able to capitalize on this opportunity and the shot was off-target.

However, in the 68-minute, the goal of the week might have been scored. Acosta got some space just outside the box and shot the ball. TFC goalkeeper Alex Bono had no chance of saving the shot. The goal also sealed the match in Cincinnati’s favour.

The other factor for Toronto FC’s loss was Cincinnati’s defence in the second half. They really shut Toronto down and did not allow them to have many scoring opportunities. An example of this was in the 90-minute.

The Cincinnati defence was alert of the danger presented by Toronto’s Jacob Shaffelburg. He was in a dangerous position to score, but Cincinnati did not allow Shafeelburg to get a shot off and the game was pretty much over.

The current situations with both teams

There is a lot of deserved criticism with TFC. With the lack of defence and the uncertain future of Jozy Altidore with the club, many people are going to point out Toronto head coach Chris Armas as the man not able to coach TFC to glory.

He tried to have five players play at the back, but it looked like the players were not used to the formation at times in the match. Furthermore, injuries continue to be a concern for Toronto.

Learn about #TorontoFC, who will start their #MLS season in #Florida and will have their training facilities in #Orlando, Florida at Omni Resort at Champions Gate.

The trend that TFC has with other Toronto sports teams forced to play their home games in the U.S. is eerily similar. Of the last five games TFC lost this year, four of them were one-goal games.

This is similar to the situation with MLR’s Toronto Arrows this year. The Toronto Raptors also had a very disappointing 2020-21 NBA season. It should not be used as an excuse, but it has to be acknowledged.

This does not explain though why Toronto is playing worse than the other two Canadian MLS teams. Both CF Montréal and the Vancouver Whitecaps FC have to play in the U.S., just like Toronto does. Also, TFC did not have trouble winning lots of close games last year.

Cincinnati was not doing too well either, but their win against Toronto has kept them in the playoff chase. They are currently 11th in the Eastern Conference with 10 points.

The next game for both teams

Cincinnati will get a week off and will next play a road game against the Houston Dynamo at BBVA Compass Stadium. The game will be available on MLS Live on DAZN, QuestTexas 55, and Star64. The game will take place at 8:30 p.m. ET.

Toronto will also get a week off and will next play a road game against D.C. United on Saturday, July. 3. The game will take place at 5:30 p.m. ET at Audi Field. The game will be televised nationally in Canada on TSN1 and TSN4. The game can also be watched on NBCSWA and TeleXitos.