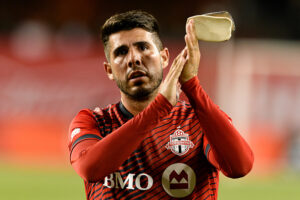 Toronto FC earns a draw in a game that was determined by halves. New York City FC dominated the first half while TFC dominated the second half. Toronto showed promise against a top team like New York City but was unable to get the game-winning goal late in the game. This was because of some great defensive plays and goalkeeping by NYCFC.

Toronto FC earns a draw at home against NYCFC

NYCFC dominated the early part of the game. They had four of the five shots on goal and did not allow TFC to generate much offence.

A stunning, sweeping move from your Boys in Blue finished off by @23SRodriguez for his second #NYCFC goal

It was a beautifully orchestrated goal. Santiago Rodriguez passed it to Alfredo Morales. Then two quick passes took place. First from Morales to Valentin Castellanos who delivered a pass to a running Rodgriguez to put the shot into the back of the net.

NYCFC would not stop there though. In the 20-minute, NYCFC was taking advantage of TFC’s defensive frailties, but Castellanos’ shot was stopped by TFC goalkeeper Alex Bono.

21′ #NYCFC scores another! They take advantage of a #TFCLive turnover, which led to an Ismael Tajouri-Shradi goal! The goal was assisted by Valentín Castellanos.#TORvNYC | 0-2 | #MLSpic.twitter.com/fpUDtyQhyc

In this game, Castellanos stole the ball from Eriq Zavaleta. He then passed it to Ismael Tajouri-Shradi, which led to another NYCFC goal. This was Tajouri-Shradi seventh goal in his last 11 games. Furthermore, this was Castellanos’ second assist of the game and might have been the player of the game for both teams. It also showed frailties in TFC’s defence. TSN showed a statistic saying that this was the 11th time that Toronto had given up a goal in the first 15 minutes of play. This is currently the most of any team in MLS right now this year.

Toronto FC dominated the second half

Toronto only had one shot in the first half. However, they quickly turned that around in the second half. Javier Perez made two notable substitution changes before the second half began. This included substituting out popular TFC players like Michael Bradley and Jozy Altidore. TFC substituted into the game Ralph Priso and Ifunanyachi Achara.

49′ What a pass by #TFCLive‘s Alejandro Pozuelo and a great finish by Richie Laryea to cut #NYCFC‘s lead by half!#TORvNYC | 1-2 | #MLSpic.twitter.com/mZlxq466V8

Just a few minutes into the second half and TFC scored a goal. Alejandro Pozuelo made a clever through ball to Richie Laryea. It was a fantastic pass with Laryea capitalizing by putting the ball between the NYCFC goalkeeper’s legs. Marky Delgado got a shot saved in the 55-minute.

TFC was not done there though. Remember that it was mentioned earlier that TFC made two substitutes. Well, both players stepped up with Alejandro Pozuelo’s goal.

55′ What a game! #TFCLive has tied the game as Alejandro Pozuelo scores his first MLS goal this year! Ifunanyachi Achara was awarded the assist.#TORvNYC | 2-2 | #MLSpic.twitter.com/qTJGmuRf5m

Priso made a terrific pass to Achara. Achara then made the right pass to Pozuelo for the easy goal in the 55-minute for Pozuelo. It is great to see Achara contributing as he missed a lot of games because of injury. They also got chances in the 60 and 62-minute. In the 60-minute, Yeferson Soteldo’s shot was saved in the bottom right corner. Then in the 62-minute, Richie Laryea’s shot was off-target as it was too high.

Toronto might have felt they should have gotten the win in the second half. However, some great goalkeeping and defensive plays played a big role in NYCFC of securing the win.

NYCFC made great defence and good goalkeeping in the second half. NYCFC was getting overwhelmed by TFC. If not for a few great defensive plays, this game would have gone TFC’s way. However, NYCFC showed why they are a good MLS playoff team.

Credit should be given to New York City for making these plays. It would have been easy for NYCFC to be shell-shocked after giving up two goals early in the second half. However, they were able to get back into the game and made some good defensive stops. NYCFC also had some glorious opportunities like the 29 and the 74-minute of play. However, none of those shots went into the back of the net.

TFC earned a 2-2 draw against NYCFC in the “Financial Centre Derby.” It was a good result, but one Toronto will need to improve on. Time is an enemy right now for Toronto. They have 15 points. TFC is also currently nine points behind Trillium Cup rivals Columbus Crew SC, who currently has 24 points. Also, the two teams behind TFC in the Eastern Conference have played fewer games than Toronto. Inter Miami CF is two points behind TFC but has two games in hand. There is also the Chicago Fire FC, which has 14 points and has played one less game than TFC.

The post Toronto FC earns a draw against New York City FC in a tale of halves appeared first on Last Word On Soccer.