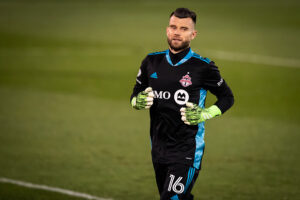 Toronto FC blows a 2-1 lead late in the second half. Patrick Mullins scored in the 81-minute to give Toronto the 2-1 lead. However, Luke Haakenson gets two late goals and Nashville wins yet another game at Nissan Stadium.

Nashville SC had most of the chances in the game

Nashville SC was the better team in both halves. They just were not able to capitalize on their chances in the first half. Dax McCarty had the first chance of the game in the 5-minute, but his shot was saved by Toronto FC goalkeeper Quentin Westberg.

Nashville will feel like they should have tied the game in the first half. CJ Sapong’s header from the centre of the box was saved by goalkeeper Westberg. The rebound then came to Anibal Godoy, who had a terrific chance to score from very close range. However, his shot went above the net and was off-target.

As good as Nashville was in the first half, they were terrific in the second half. Randall Leal got a shot on target in the 55-minute. Then Nashville finally scored the first goal of the game. This goal came from a set-piece. They would get three more shots on goal in the 65, 71, and 74-minute of play.

90’+2′ #EveryoneN‘s Luke Haakenson! He steps up again and gives Nashville their first lead in the game.#NSHvTOR | 3-2 | #MLSpic.twitter.com/xVgRR9yVr4

However, Nashville was behind 2-1 after Mullins scored in the 81-minute. Luke Haakenson would then take over and scored his first two goals in MLS. What a moment for Haakanson, who had not scored an MLS goal before this game took place!

Credit should be given to CJ Sapong, who made a terrific pass with his head to Haakanson for his first-ever MLS goal. There was also Daniel Lovitz who delivers a terrific pass to Haakanson. This allowed Haakanson to get past the Toronto defence and was alone with TFC goalkeeper Westberg. Haakanson took advantage of the situation and won the game for Nashville.

TFC took advantage of their scoring chances. They had nine shots, with four shots on target, but were able to score on two of those shots. They were also more efficient compared to Nashville.

Their first shot of the game was a Michael Bradley shot in the 17-minute, which was off-target. One of their best chances to score was in the 21-minute when Alejandro Pozuelo delivered a fantastic pass to Jonathan Osorio.

Unfortunately, for Osorio, his shot was close but failed to hit the target. He would capitalize though in the 26-minute. Auro Jr. played a big part in Osorio’s goal. He made a terrific run and got inside the box. He then made the pass inside the box to Osorio, who shot the ball past Nashville SC goalkeeper Joe Willis and into the back of the net.

Two big chances Toronto had included Chris Mavinga’s header in the 43-minute, which went straight to Nashville goalkeeper Willis. Then there was the chance in the 90+5-minute, where Richie Laryea had a difficult chance to score for Toronto.

This is a recurring theme for the Toronto FC team this year. For the second-straight game, TFC gave up three goals in one game. In this game, TFC gave up way too many chances for Nashville to score. If it was not for their goalkeeper Quentin Westberg, Toronto might have conceded more goals.

In the 71-minute, Hany Mukhtar had a golden opportunity to extend the lead against Nashville. However, Westberg made a big save to keep the game tied at the time. He was probably the best player for Toronto.

There are other instances of poor defending. This includes defending a set piece in the 62-minute. Mukhtar delivers a cross following a corner. The ball went straight to Jack Maher’s feet. He had time to settle the ball and put the ball into the back of the net.

Toronto has given up the most goals of any team in MLS. They have given up 18 goals in just nine games played. This is a problem that will need to be fixed for Toronto.

The other problem is losing close games. This is the fourth straight game where Toronto has lost a game by one goal. If Toronto wants to contend for an MLS Cup, they should work on defending on set pieces and in several other areas.

TFC showed that they can defend in the first half of this game. So, obviously, they have an ability to defend. They also have Chris Mavinga, who was Toronto’s second-best player last year. The question is can they do it for a full 90 minutes of play. The answer right now seems to be a no.

The other issue of not winning close games is also a bit concerning. This might change if Yeferson Soteldo comes back from his injury. Their offence is decent with 12 goals scored.

83′ What a game! #EveryoneN‘s Luke Haakenson scores his first-ever MLS goal to tie the game.#NSHvTOR | 2-2 | #MLSpic.twitter.com/xyADTKxvEc

So, scoring is not the problem for Toronto. This is while Nashville is now on a roll and Haakenson had a big game. They are currently in a five-game unbeaten run. This includes Nashville winning their last two games.

Toronto will have little to dwell on their loss against Nashville. They are back at it on Saturday, June 26 against FC Cincinnati at Exploria Stadium. The game will be shown in Canada on TSN1, TSN3, and TSN4. The game will also be shown on Star64 at 7:00 p.m. ET.

Lastly, on the same day, Nashville will host CF Montréal at Nissan Stadium at 8:30 p.m. ET. The game will be shown in Nashville at MyTV30. This is while the game will be televised in Montreal on TVA Sports.