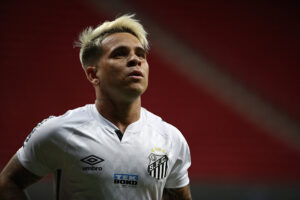 The 5-foot-2 23-year-old Venezuelan played with Santos from 2019-21. A left-winger who can also play midfielder, Soteldo has scored 20 goals in 97 appearances. He also scored one goal in 18 appearances with the Venezuelan national team. Soteldo was also part of the Venezuelan team that made the 2017 FIFA U-20 World Cup Final. They would, however, lose 1-0 to England. According to The Canadian Press, the news was made official on Friday night.

Michael Singh of Waking the Red gave details on this transaction. TFC had to pay $6 million USD. Toronto will have 75% of the player’s rights with Chilean side Huachipato still owning 25%. Santos owes money to Huachipato for acquiring Soteldo in 2019. This is while Santos still has a 12.5% sell-on fee for the player. Lastly, he will not be considered a Young Designated Player as he turns 24 in June.

One of his most notable goals for Santos FC was in the 2020 Copa Libertadores semi-finals against the Boca Juniors from Argentina. This played a part in Soteldo making the Copa Libertadores Best XI. Also in that same year, Soteldo made the Campeonato Paulista Team of the Year.

At that point, Santos led the second leg and game 2-0. They would end up scoring another goal and winning the two-game aggregate 3-0. However, Santos would fall in the final against fellow Brazilian side Palmeiras 1-0.

This is what TFC president Bill Manning said on OneSoccer that he was looking for a third designated player and how he hopes this player will fit current Toronto head coach Chris Armas’s system.

Before the deal became official, Soteldo said he was excited to play for TFC and believes MLS “will be one of the most powerful leagues in the world.”

It is unclear when Soteldo will begin to play for Toronto. TFC will have two important Concacaf Champions League quarter-final games on April 27 and May 4 against Cruz Azul. This is a result of winning the aggregate 3-2 against defending Liga MX champions Club León in the Concacaf Champions League round of 16. They will then resume their MLS season on May 8 against the New York Red Bulls. TFC’s last MLS season game was a 2-2 draw against the Vancouver Whitecaps FC.