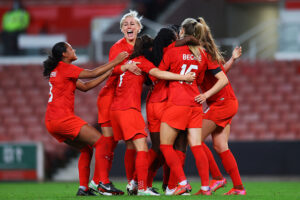 The CanWNT Olympic preview is set. On April 21st, the Olympic groups for both the men’s and women’s tournaments were revealed and so has the CanWNT. There are three groups with four teams each. The top teams from each group and the two best third-place finishers will qualify to the quarter-final stage of the Olympics.

The CanWNT (Canadian Women’s National Team) Olympic qualifying group has been revealed. Canada is ranked eighth in the world and will look for its third-straight medal in the Olympics. The CanWNT Olympic Preview features Canada’s group including Chile, Great Britain, and Japan.

The groups are locked in

They are the lowest-ranked team in the group ranked 37th in the world. One of their most notable players is Yanara Aedo. She played a big part in the Washington Spirit Reserves winning the 2015 USL W-League title. She currently plays for the Spanish-based side Rayo Vallecano. In 25 appearances, she has had two goals.

Aedo is a veteran of the Chile national team, being with them since 2010. She has made 56 appearances for the team and has scored nine goals. Chile made the two-leg intercontinental playoff against Cameroon when they finished runners-up in the 2018 Copa America Femenina. They qualified for the 2020 Tokyo Olympics by defeating African-side Cameroon 2-1 on aggregate. They won 1-2 in Cameroon, before finishing with a 0-0 draw at home in Chile. This is what Chile captain and goalkeeper Christiana Endler said about the achievement:

“We are super proud to be the first Chilean women’s team to qualify for the Olympics. This can be a precedent for other teams to work as well as we did. We are showing that Chilean women are strong, capable, athletic and can achieve everything they set out to do.”

Just two years ago, Chile made their first-ever FIFA Women’s World Cup appearance. In that tournament, they earned their first-ever win in the FIFA Women’s World Cup against Thailand. Canada has only faced Chile once in its history. This was a 0-1 loss in the 2013 International Women’s Football Tournament of Brasilia. Aedo was the one who scored the game-winning goal to defeat Canada in the tournament.

When looking at Great Britain, one has to look at the FIFA rankings of the four federations that make up the country. England is ranked sixth while Scotland is ranked 23rd, Wales ranked 32nd, and Northern Ireland is ranked 48th.

This will be a rivalry game for Canada. Canada eliminated Great Britain from the 2012 Summer Olympics in London, England. Then in 2015, the England part of Great Britain repaid the favour. They eliminated Canada in the 2015 FIFA Women’s World Cup.

Canada should feel confident against Great Britain. The Canadians faced Wales and England in April. They defeated Wales 0-3 and more impressively England 0-2 in two competitive friendlies, which were both won on the road.

NWSL players from the United Kingdom

England clinches the 2019 #SheBelieves Cup with a convincing 3-0 win over Japan.

The English currently have one NWSL player. Rachel Daly is the lone NWSL English women’s soccer player. She has played for the Houston Dash. Daly is a forward/midfielder who had scored 24 goals in 80 games. She was most recently loaned to West Ham United, where she has scored three goals in nine games. With the Dash, she won the 2020 NWSL Challenge Cup.  There is also Jodie Taylor, who left the OL Reign of the NWSL to join Lyon. She won the SheBelieves Cup for England along with Daly in 2019.

Jessica Fishlock is the longest-serving British NWSL player. The midfielder has been with the Reign since 2013. In that time period, she had 24 goals in 99 appearances. She is a decorated Welsh soccer player and has played well in the NWSL. Scotland has two NWSL players. Rachel Corsie is one of them. She currently plays for the Kansas City NWSL team but played from 2015-17 with the Seattle Reign. In that time period, the central defender played 44 games and scored three goals.

The Japanese women’s national team has most of their players playing in their domestic league. As a result, there are currently only four players playing in the NWSL. This includes Saori Takarada, who will start playing for the Washington Spirit in 2021. She played for Cerezo Osaka Sakai from 2013-20. At that time, she scored 44 goals in 110 appearances.

Another NWSL Japanese player is Yuka Momiki. Momiki was born in the U.S. to Japanese parents. She has not played a game yet for the OL Reign. Momiki has played 30 games for Japan, scoring 10 goals in those games. So, she will be a threat that the Canadian women’s national team has to be aware of.

Welcome to the squad, Yuka Momiki!

There is also Kumi Yokoyama from the Washington Spirit, who has yet to play a game in the NWSL. She currently has 17 goals in 43 appearances for Team Japan. From 2011-15, Japan and the U.S. were the two best teams in women’s soccer. Japan won the FIFA Women’s World Cup in 2011 against the U.S. in the final. Unfortunately, Japan has recently fallen into tough times, including failing to qualify for the 2016 Olympics. As a result, they are ranked 11th in the world.

However, Japan is still a particularly good team. The Japanese have won seven, tied three, and lost four games against the Canadians. This included a friendly in 2019, where the Japanese defeated the Canadians 4-0 on October 6, which included one goal from Momiki.

Canada has the second-most NWSL players. Furthermore, they qualified for the Olympics with a CWOQ semi-final win over Costa Rica. However, it is important to note that that the best players from the four federations will be representing Great Britain. This is while Japan, qualified as hosts this year and could be seen as the favourite in the group. Lastly, Chile is not expected to do much in the Summer Olympics this year. Saying that Canada should get through the group stage with a top-two finish, giving themselves a chance to win a medal.

Canada got some valuable experience from the SheBelieves Cup and their recent friendlies with England and Wales. Their first game will be against Japan on July 21. The Canadians will then face Chile on July 24 and end their group play against Great Britain on July 27. Canada will also have two friendlies in June. They will face the Czech Republic on June 11 followed by Brazil on June 14.