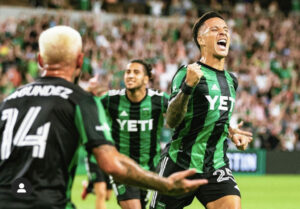 AUSTIN, TX – Had this game been played in England, ‘Can we play you every week?’ would’ve been the chant rolling out of any stand in any ground. Such is the traditional cry ‘over the pond’ when one team routs another just as Austin FC did against Portland Timbers for the second time this season. When the teams last met on July 1st, Austin registered their historic first victory at Q2 Stadium by a score of 4-1. On this occasion, 3-1 would have to do.

Austin scored all 3 of their goals in a blistering first-half blitz. Just a few minutes into the match, Alex Ring tested Timbers keeper Steve Clark from distance. It was a sign of things to come. Cecilio Dominguez cheeky cut and turn just inside the box drew a foul from Josecarlos Van Rankin. Initially, the referee waved away pleas for a penalty kick, before consulting VAR and deciding otherwise.

After a rocky couple of weeks culminating in being withdrawn from the last match v Vancouver after just 30 minutes, it had to be Dominguez to take the kick. He was waiting on the spot, ball in hand, for the referee to return from the VAR monitor. Dominguez duly froze Clark, and swept the ball into the bottom right-hand corner of the net. His and his teammate’s celebration suggested this was more than just an 11th-minute opening goal.

Dominguez had apologized to his teammates after the last match. In the week, head coach Josh Wolff has spoken effusively of his respect for and love of Cecilio. Tonight, he trusted the Paraguayan to lead the line – and Dominguez delivered.

3 minutes later, and it was the ever-reliable Diego Fagundez heading home an inviting Nick Lima cross from deep. Wolff, noticeably, wearing a green polo shirt for the first time this season, stood on the sidelines admiring his player’s craft and creativity. More was to follow, namely the play of the night.

Sebastian Driussi had already shown his class in the previous two matches, a cameo debut v FC Dallas, and an assist in the disappointing defeat to Vancouver Whitecaps. Today, playing in his more familiar 10 role, with an advanced Alex Ring buzzing around him to provide opportunities to connect triangles and change angles, the Argentinian teased the Portland backline before tearing through them.

Driussi’s savvy to know what pass to play at any given time coupled with his ability to play that pass is quickly beginning to elevate Austin’s attack. The aforementioned play of the night began with Driussi.

This was Austin’s best opening 45 minutes of the season. However, as has become a bit of a worrying trend, they struggled at the restart. Portland came out hot second half and could’ve scored at least one, possibly two, within a few minutes were it not for some desperate defending as well as some inspired goalkeeping from Brad Stuver. In the 56th minute, not even the heroic efforts of ‘Stuverman’ could keep out a thunderous shot from the edge of the box, courtesy of Timbers Yimmi Chara.

Portland had a lifeline. Austin were rocking. Wolff responded. The influential Driussi, laboring somewhat from limited match minutes, was withdrawn in favor of additional defensive cover in the guise of Jhohan Romana. The switch worked. Austin settled down, nullified the Timbers attack, and began to wrest possession back. Both teams created a handful of glimpses at goal but in truth, the game was over as a contest with 20 minutes to go. Austin had deservedly secured their 3rd home win of the season – 2 of which have come against the accomodating Timbers.

Last Word: Austin delivered an excellent, much-needed, all-around team performance. Stuver was solid. Zan Kolmanic and Dani Pereira delivered mature performances belying their young years and limited experience. Fagundez and Gallagher stretched the field and provided constant outlets as willing runners. But the headlines will be dominated by a Paraguayan, Dominguez, a Finn, Ring, and the Verde’s newest star, an Argentinian, Sebastian Driussi. And still Senegalese Moussa Djitte to come…