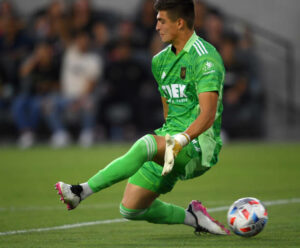 Disappointing. A familiar theme for LAFC this season, once again left pondering what ifs, and lamenting missed chances. While it was the Portland Timbers who cut down LAFC last night, this isn’t the first time a late goal has broken the hearts of the black and gold. Last night was the third time this season LAFC gave up a game losing goal past the 85th minute mark. A fourth loss, to the rival LA Galaxy, saw the game losing goal scored in the 80th minute.

While Los Angeles wasn’t terrible, and controlled a large chunk of the match, Portland did extremely well to start hot, and finish strong. The opening goal of the night was a historic one at Providence Park. At just the two minute mark, Portland’s Diego Valeri took control of a perfect lofted pass into the box, and calmly netted it for the lead. The goal was also Valeri’s 100th goal as a Timber.

LAFC wouldn’t wait long to even up proceedings, flexing some precise passing of their own. In what as a theme, the black and gold started out wide, this time with Diego Rossi, who put a pass across the box to a streaking Carlos Vela, who finished it for the equalizer. Leading up to the goal, LAFC had put in several chances identical to the goal, executing a clear plan of attack. However, that plan would crumble under the weight of exhaustion, and severe lack of discipline. A simple throw in, that should’ve been put to a stop near the touch line, led to one last chance for the home side with a ball into the box. A leaping Felipe Mora, who had beaten Eddie Segura on the run, got just enough on it with a glancing header for the second of the night, and a massive win at home.

At all levels. LAFC need to finish the chances they create in the final third, and they need to improve how they finish out each match as a whole. Losing one match via a late goal is hard enough, to do so three times over the course of 14 games, takes a toll. While it would be too harsh to call them dejected, players did look a bit bewildered at what this season has become. As if many are waiting for the proverbial switch to flip. And, in some ways it has. A recent three win streak, winning four of their last seven, sees them sitting in fifth, a mere eight points off the top.

The growing narrative that LAFC are failing to create chances, is wrong. They are failing to finish them, wiith 73 shots over the last five matches alone. However, for 21 MLS matches now, they have failed to score more than twice in a match. For a team that was once an offensive juggernaut, they now need to learn how to consistently win, without relying solely on scoring handfuls of goals.

It has to be said, having a professional soccer team play games on artificial turf, is rough. Sure, you can call it an excuse, but Head Coach Bob Bradley isn’t wrong in his displeasure with these type of surfaces. “Turf is hard to play on, plain and simple” he said when speaking post-match. “[Anyone] who watches football around the world, should be able to see the differences in the way the ball bounces, the timing, everything.” Anyone who has stepped foot on artificial grass knows just how different doing anything on that surface feels. Now imagine having to execute plays that are practiced with precise timing in mind, only to have it all undone by a random rubber pellet. The time has come to have some uniformity in the MLS, starting with investing in, and properly maintaining, actual grass surfaces.

This is the reality of the season. Now 14 games into the 2021 campaign, its fair to say that the LAFC we see now, is the one we will get all season. Could they improve and pick up steam at the right time to really dominate a postseason run? Of course. This is still an extremely talented team, but the time waiting for the light to go off and the juggernaut version of this team, has ended. Its time to start analyzing for the future, reworking tactics, trying things differently to find consistency. This isn’t to say its time to blow it all up and rebuild. This is to say that even Kobe Bryant had to adjust his game later in his career, perhaps its time for LAFC to stop relying on brute force, and focus on finesse.

The post Timbers Cut Down LAFC with Late Winner appeared first on Last Word On Soccer.