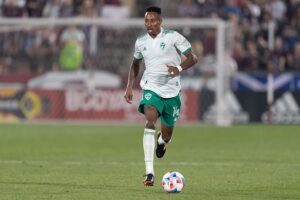 COMMERCE CITY, Colo. – It was a battle of top four teams in the MLS Western Conference, as Colorado Rapids hosted Sporting KC on Saturday night. SKC made six changes from their previous game, starting several young players ahead of their Leagues Cup match on Tuesday. Mark-Anthony Kaye made his debut for Colorado.

The match got off to a tight start. Sporting pressed from the front well preventing Colorado from passing long to Michael Barrios. Wilson Harris nearly had a dangerous shot on 10 minutes after a turnover but Collen Warner made a great defensive play.

Barrios nearly scored 28 minutes in. He got in behind for the second time and tried to chip goalkeeper Tim Melia, who came off his line. The ball landed on the top of the net. Colorado’s passing and movement got better as the half went along, creating chances for Cole Bassett and Kaye.

Melia came up big in the final moments of the half, denying Price on a run up shot from the middle of the box. The half ended scoreless.

Sporting made two halftime substitutions and four total by the hour mark. That made them more stable at the back and dangerous in transition. Alan Pulido grazed the outside netting on a counter attack in the 66th minute.

The home side pushed for a goal in the final 20 minutes, with Melia making several big saves. First sub Jonathan Lewis had a shot trickle just feet wide of the far post in the 74th minute with no one there. A minute later Diego Rubio headed the ball on a corner but Melia made the save with an outstretched arm.

Melia would deny Lewis in the final minutes on a break away. The goalkeeper came off his line on a breakaway to win the ball. There was no chance that was going to get called a penalty.

Melia is the man: Tim Melia steals a point, having one of his best performances of the year. He made several huge saves on open shots in both halves. His timing and positioning coming off his line were textbook. He kept a cleansheet despite Colorado’s near 3 xG.

MAK Attack: Kaye did well in his debut, going 90 minutes. He was dynamic in the final third, with some great passing and runs. The team didn’t miss a beat with him playing instead of Kelly Acosta who was under Health & Safety protocol.

Performance and points: Last month, Colorado outplayed Seattle Sounders and got a point in a game Sounders Twitter thought Seattle should have lost. Again at home, they outplayed a team that was better than them on player (who had a rotated lineup). It’s a performance but not a result to be proud of. On the other side, SKC has struggled at DSG but got a result with a rotated squad, saving the legs of some starters for Leagues Cup next week.