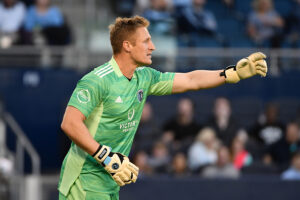 CARSON, Calif. — Sporting Kansas City took over the top spot in both the Western Conference and Supporter’s Shield standings with a 2-0 win at the Los Angeles Galaxy on Sunday night. Tim Melia made seven saves to keep a clean sheet. Johnny Russell and Khiry Shelton scored their first two goals of the season.

Tim Melia had made five saves before the clock struck 30. The Galaxy, despite missing their Mexican star, Javier “Chicharito” Hernandez, layed siege to the Sporting KC net, counterpressing their way to chance after chance. Sporting KC couldn’t get the ball out of their own half, and registered one shot in the first half, to the Galaxy’s nine.

“I thought for 78 minutes, it was arguably the best game we’ve played all year,” Greg Vanney said. “The part that missed was putting the ball in the back of the net. The piece where you create so many chances. We have to score because it doesn’t matter how well you play.”

Sporting KC had to withstand the storm a bit though in the second half and eventually started to gain a footing in the match. Vermes never made a sub, trusting his starting XI to go the entire distance. Eventually they were fruitful.

After Andreu Fontás smashed his header from point blank off the upright, on the ensuing goal kick Jonathon Bond played the Galaxy right into the press from Sporting KC. Felipe Hernandez won the ball of the defender, played in Johnny Russell whose first attempt was saved by Bond, but the follow up header was easy for Russell to slot home and Sporting took the lead after looking the least likely to score for the first 80 minutes.

The Galaxy pushed for an equalizer, but they got caught out at the end of stoppage time and Khiry Shelton went coast to coast, deking Johnathon Bond and finishing the match at 2-0.