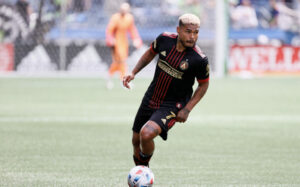 The Venezuelan striker is an icon in the city of Atlanta and the poster boy for the franchise, breaking a number of goalscoring records and helping the Five Stripes lift MLS Cup, US Open Cup and Campeones Cup so far.

However, Martinez found himself in the middle of a storm when it emerged Heinze had kept him away from team training for non-fitness reasons. Fans quickly turned against Heinze, with a hostile mood reverberating around Mercedes-Benz Stadium during Atlanta’s 1-0 defeat to the New England Revolution at the weekend. Following his removal as manager, reports suggested Heinze had denied players water breaks during pre-season training in just one of several incidents that decimated team morale.

This “free Josef” sign has had a lot of airtime tonight

But Heinze is gone and in a bid to draw a line under the Argentine’s tenure, Martinez faced the media via a Zoom call on Tuesday. What did we learn from that press conference? Here are three things:

1. Martinez is Atlanta United through and through

Speaking to reporters shortly after Heinze’s departure, club president Darren Eales insisted Martinez was fully behind Atlanta United. “Josef [Martinez] is committed to Atlanta United… He’s Atlanta United through and through,” he said.

It doesn’t take much observation to know just how much Martinez means to this city, with murals painted across Atlanta in his honour. Equally, every time Martinez takes to the field, he gives his all to the Five Stripes and has consistently spoken of his love for the club and the city since arriving in 2017.

That love was on full display on Tuesday, with Martinez speaking of the emotion he feels when he thinks about Atlanta United, his desire to bring “joy” back to the fanbase and how he’d “give his life” for the team.

“I get emotional,” Martinez said of the support he receives from the ‘17s‘. “Since I’ve been here, people have treated me like another son. When I’m on the field, I try to give my all to repay that love I receive from the fans. As long as I’m wearing an Atlanta United shirt, I’ll give my life for this team.”

Addressing the rumours that this could be his last season with Atlanta United, he added: “The first time I came here I said this is my club, this is my city and I love to be here. I want to retire here. I love this club.”

Martinez is never one to mince his words and on this occasion, it seems like his club president is right — the Venezuelan is indeed “Atlanta United through and through”.

2. He wants to put the Heinze era behind him

There was an unusually high attendance for Tuesday’s Zoom call from outlets across the league and there’s no doubting this was partly down to what Martinez had to say about Heinze’s departure, his working relationship with the Argentine and those water breaks and reported MLSPA grievances.

But on the whole, likely down to both a desire to remain diplomatic on behalf of the club and to put the incident behind him, Martinez largely remained diplomatic.

“There wasn’t a problem,” Martinez said of his relationship with Heinze. “Obviously, I respect the decision that the club has made. I have to be professional about this. The issues were resolved.”

But when asked what he had learned during his time under Heinze, Martinez responded: “How you train is how you play, that’s what I’ll take from him.” Given Atlanta currently sit 10th in the Eastern Conference with just two wins and 13 goals from 13 games, this is hardly a glowing reference of his former manager.

That said, Martinez is now clearly fully focused on the future and putting Atlanta United back where they and their supporters feel they belong.

“We have to come in, give our best and get back to being one of the greatest clubs in the world,” he said. “What we have to do now is work hard, get back to winning games and being able to provide our fans with that joy again.”

3. Martinez recovered from a “heart problem” caused by Covid

The biggest revelation of the press conference was undoubtedly that Martinez suffered a “minor heart issue” resulting from his battle with COVID-19 while he was away at Copa America with Venezuela.

Martinez was forced to quarantine for 12 days while on international duty and upon his return to the United States, a scan revealed an issue with his heart that delayed his return to action — though Heinze still forced the 28-year-old to train alone.

“After the 12 days that we were in quarantine, for us to return to physical training, we had to pass certain physical tests and one was a cardiac test,” he said. “I don’t think it was a very big problem, but it was something we had to be careful with.”

Thankfully, Martinez revealed he is now fully fit and healthy, adding: “Thanks to God, everything is resolved, and now we’re here, thinking about [Wednesday’s] game.”

The post Three things learned from the Josef Martinez press conference: “I’ll give my life for Atlanta United” appeared first on Last Word On Soccer.