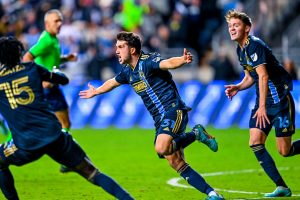 With revenge firmly in their sights, the Union can take confidence from seeing off The Orange and Blue. Victory over the Lions was particularly impressive, given it was the visitors that handed the Eastern Conference winners one of their biggest losses of the MLS regular season in Ohio.

Their 3-1 win on August 7 put an end to a seven-game win-less run for Pat Noonan’s side. However, Jim Curtin’s team snuck past the visitors this time to set up a fearsome final against The Boys In Blue.

Blake’s the Best of the Bunch

Jamaican goalkeeper Andre Blake certainly justified his inclusion on the Major League Soccer Most Valuable Player candidate list, coming up clutch as captain when Philly needed him most. Five saves against FC Cincinatti on Thursday night kept the travelling team at bay. It’s the first time that the Union have kept back-to-back clean sheets in competitive games since the end of August, where they clinched two consecutive 6-0 wins against both D.C. United and Colorado Rapids.

Thursday’s match saw the two highest-scoring teams in the East go toe-to-toe, with many anticipating goals galore. The fact that it was settled by a sole goal is a huge credit to, perhaps Leon Flach but arguably more so, the stand-in skipper with several super saves.

It sounds silly to say, but this was perhaps a good time for Daniel Gazdag to perform poorly in a big game. The Hungarian was uncharacteristically quiet, which must make Union fans believe that he’s saving a big performance for their Eastern Conference final. Or potentially beyond.

The free header that the 26-year-old missed on Thursday, after just seven minutes, is a rare occurrence. And if you were blissfully unaware of his hat-trick against Toronto, you’d think that he were in a poor vein of form. But, to Gazdag’s credit, he never shied away from trying to make things happen.

His 47 attempted passes was the most of any Union player in the semi-final, albeit 34 of those (72 percent) were accurate. His four shots in the game were second only to Julian Carranza (5), but just one hit the target. It’s testament to the talent within the Union squad that, whilst one of their key men wasn’t at his brilliant best, somebody takes matters into their own hands and steps up when it counts.

Whilst their Euro counterpart – Daniel Gazdag – didn’t have his best game, Union’s German players showed what they were all about and took on that mantle.

Kai Wagner missed the Toronto match through suspension, with his return to proceedings one of the key positives for Philly on Thursday. His delivery from set-pieces is always a threat, half his attempted long balls found their target, and defensively he was solid too.

Winning both tackles, making a block and two crucial clearances, he was dribbled past just once. The 25-year-old was back to his best in an offensive sense. And it proved a near- perfect apology to the Union supporters after his sending off against Charlotte.

59’ #DOOP scores! Mikael Uhre was able to find Leon Flach, who puts the ball to the top left corner of the net as Philadelphia takes the lead! #PhiladelphiaUnion#PHIvCIN | 1-0 | #MLSCupPlayoffspic.twitter.com/UD33SUvigT

Not renowned for his goal-scoring prowess, it was great to see Leon Flach find his shooting boots. It’s proved tricky for the 21-year-old to establish himself by cementing a consistent place in the starting eleven. But with Alejandro Bedoya out with a hip flexor strain, it was Flach who took on some responsibility, gambling on getting into the box and it paid dividends. A fine half-volley after Mikael Uhre’s cutback gave Roman Celentano no chance whatsoever.

Ultimately, the visitors just came up short and couldn’t prevent Philadelphia Union reaching the Eastern Conference final. Up against a new-look NYCFC, who got the better of Eastern runners-up CF Montreal, they’ll want a different outcome than in their playoff final meeting last year.