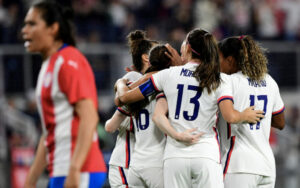 This week on the new episode of Three in the Back, R.J., Rachael and Alex dive into the world of women’s soccer. In the first segment, Rachael applauds Andi Sullivan for scoring her first international goal for the USWNT, while R.J. discusses Christine Nairn retiring from the NWSL and becoming a firefighter. Alex rounds out the first segment with the new NWSL Expansion Draft chaotic roster rules shuffling.

In the second segment, just one point, Rachael breaks down the importance of the Houston Dash’ match against Tigres. Then the team talks about the Washington Spirit vs. OL Reign game that didn’t happen and the North Carolina vs. Portland match that DID happen.

Internationally, Alex discusses how Mark Parsons is playing double mode on FIFA 22 by coaching the Thorns and the Netherlands, who kicked off UEFA World Cup qualifying with a dismal 1-1 draw against the Czech Republic. Rachael goes back to the Santos vs. Chivas game she previewed last show and how it did not fail to live up to its hype. R.J. rounds out the international section by discussing Nadia Nadim and her torn ACL.

Finally, the group previews what matches they are looking forward to. Portland vs. Chicago is high up on Alex’s list. Rachael picks another Liga MX Femenil match between Santos and Monterrey with table implications. R.J. wonders if Kansas City and Washington will even happen.

Who We Are: Three in the Back Podcast

RJ Allen has been covering women’s soccer since 2016. She is currently the Editor-In-Chief of Backline Soccer and co-host of The 123rd Minute Podcast, the Attacking Half Podcast and The Pro Foul Podcast. You can find her on Twitter @TheSoccerCritic.

Rachael Kriger is a senior editor at Last Word on Soccer, where she covers the Seattle Sounders, MLS and the USMNT. She is also the social media manager for Equalizer Soccer and is in the NWSL Media Association.

Furthermore, Rachael is the communication director for the North American Soccer Reporters. A native of Moscow, Russia, Rachael grew up playing soccer and basketball. While she coaches basketball, her love of sports reporting stems with soccer. She currently resides in Ocala, Florida, where she is a youth minister at Blessed Trinity Parish. Follow her on Twitter, @RachaelKriger.

Alex is a broadcaster, producer and writer covering soccer in Chicago. His left foot is totally useless, so he’d have to play on the right side of this theoretical defense. You can follow him on Twitter, @acampbellsports.

The post Three in the Back Podcast: NWSL Expansion rules mess, USWNT takes down Paraguay appeared first on Last Word On Soccer.