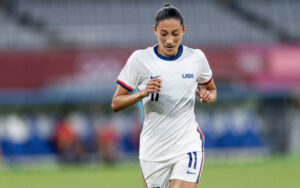 Stop us if you’ve heard this before: Rachael Kriger and R.J. Allen are starting up a podcast. It was done before with the Pro Foul Podcast, and now the duo have hit the reset button. Enter in Alex Campbell and producer Nicholas, and you’ve got yourself a new show. Welcome to “Three in the Back,” a women’s soccer podcast.

In the first episode of the biweekly series, Rachael, R.J. and Alex talk “Wild and Wonderful,” the segment where something good, something bad or something weird happens in the news. Rachael kicks us off by giving kudos to her hometown team, the Univ. of Pittsburgh women’s soccer program, for beating a ranked opponent for the first time in 13 years.

Of course, the next topic should surprise no one: Christen Press and her big move to Angel City FC. The trio talks trade ramifications and then dives into the hiring of Freya Coombe as head coach.

The next segment is called “Just one Point,” which is where each person picks an NWSL match to talk about. Rachael kicks us off again by talking about a big come-from-behind victory for OL Reign over Gotham, 3-2, including two penalty kick goals from Megan Rapinoe. R.J. talks about Racing Louisville and Chicago’s semifinal game of The Women’s Cup, highlighting Ebony Salmon’s performance. Finally, Alex breaks down the Washington Spirit’s 2-1 win over Orlando.

We travel around the world for the next segment: “Around the World of WoSo.” To no one’s surprise, Rachael hypes up Liga MX Femenil and details the new rule that allows 2 international players to sign for league teams. Previously, only Mexican players were allowed to compete in Liga MX Femenil.

R.J. chats about Lucy Bronze and how the star defender recently underwent knee surgery. Alex ends this segment scratching his head and wondering how no teams have signed Barbara Banda of Zambia after a stellar showing at the Tokyo Olympics.

The fourth and final segment is called “What We’re Watching,” essentially previewing some upcoming matches. Alex takes a different route and talks about the future for Tobin Heath vs. Louisville vs. the NWSL vs. Europe. Rachael proclaims that the Cascadia Rivalry between the Portland Thorns and OL Reign is the only legitimate geographical rivalry in the NWSL. Finally, R.J. closes us out by highlighting Portland vs. Gotham.

Who We Are: Three in the Back Podcast

RJ Allen has been covering women’s soccer since 2016. She is currently the Editor-In-Chief of Backline Soccer and co-host of The 123rd Minute Podcast, the Attacking Half Podcast and The Pro Foul Podcast. You can find her on Twitter @TheSoccerCritic.

Rachael Kriger is a senior editor at Last Word on Soccer, where she covers the Seattle Sounders, MLS and the USMNT. She is also the social media manager for Equalizer Soccer and is in the NWSL Media Association.

Furthermore, Rachael is the communication director for the North American Soccer Reporters. A native of Moscow, Russia, Rachael grew up playing soccer and basketball. While she coaches basketball, her love of sports reporting stems with soccer. She currently resides in Ocala, Florida, where she is a youth minister at Blessed Trinity Parish. Follow her on Twitter, @RachaelKriger.

Alex is a broadcaster, producer and writer covering soccer in Chicago. His left foot is totally useless, so he’d have to play on the right side of this theoretical defense. You can follow him on Twitter, @alex_s_campbell.

The post Three in the Back Podcast: A Bottle of Strongbow & Soccer appeared first on Last Word On Soccer.