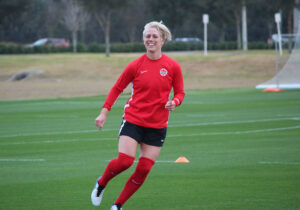 ANALYSIS – The WPSL Canada is going to start off as a Division II league. However, there are plans to have a professional women’s league in Canada within two-five years (seen in the press release just below). They have revealed four cities so far – Montreal, Toronto, Calgary, and Vancouver.

The WPSL Canada gave a press release yesterday explaining what the league is about. It will be backed by WPSL (USA); however, it will be a different entity from WPSL (USA). The league will also be operated by Canadians to grow the game.

This is what was said on the statement according to the WPSL Canada’s press release seen above.

“Clubs will partner with the league rather than a membership model you typically see in the amateur/semi-pro level (even in the WPSL US).”

This is exciting news and something that was a possibility that came to mind when they revealed it a few days ago. According to Cami Kapte of Global News earlier this year, the Calgary Foothills Soccer Club was laying a foundation for this plan. Both plans seem to be very similar, but it remains to be seen if they are the same or not. That same ownership group from Calgary also wants an NWSL team.

Lastly, this is the league structure stated by another page of WPSL Canada’s press release:

“The league will operate in two conferences to start: Canada West and Canada East. Clubs will play in their respective conference, followed by a conference playoff and a national championship.”

It is important to note that the WPSL Canada is not a sanctioned Division II league yet. However, according to Myles Dichter of CBC Sports, a representative of the league said that they “made progress,” and have met with Canada Soccer on “numerous occasions.”

We’re answering the call for a Canadian Women’s League

It may be disappointing that this league is not starting off as a pro league. However, there are plans to have a pro women’s soccer league in the future. It was really smart of WPSL Canada to have teams in the four biggest markets in Canada. This is also not something to take for granted. For example, the CPL currently does not have a team in Greater Montreal and the CEBL does not have Calgary as of right now.

There were hints that the pro women’s league was coming to Canada beforehand. At the Canadian Championship Final, Canada Soccer president Nick Bontis said they are getting closer to a pro women’s league according to OneSoccer. Then on the day before Pacific FC won the North Star Shield, CPL commissioner David Clanachan said this according to CPL Soccer:

“Can’t wait until we get to a women’s professional league in Canada. That’s going to come.”

It is unclear if this was the league they were talking about. However, if one watches both interviews, one will notice that the question was not really linked to the answer. They brought it up themselves. This shows the real possibility of a pro women’s soccer league in Canada.

There is a lot of optimism now for pro women’s sports in Canada. The Canada Co-Operative Championship Rugby League will have a pro men’s and women’s pro rugby league starting in 2022. There is also a possibility of a pro women’s basketball league mentioned by CEBL commissioner Mike Morreale last month. This is according to Lori Ewing of The Canadian Press.

Also, even with the loss of the CWHL, a Canadian women’s hockey league, Toronto currently has a team with plans to have one in Montreal in the Premier Hockey Federation (Marisa Ingemi was the one who first reported about the possible Montreal team).

As of right now, this would still make it possible for Canada to have an NWSL team(s). This is because Canada still does not have a tier-1 league or team. This might change though when the WPSL Canada becomes a pro women’s soccer league. In the same Global News article from Kapte, Calgary is in discussions about possibly having an NWSL team. They seem to be the frontrunner for an NWSL team. According to Duane Rollins of SoccerToday, they were after an NWSL team before the CanWNT won gold in Tokyo 2020. After that, Toronto has been mentioned, seen in Jozy Altidore’s Tweet above.

Another possibility could be Vancouver. They almost got Canada’s first-ever NWSL team back in 2018. However, according to Harjeet Johal of The Equalizer, the deal fell through between the Vancouver Whitecaps FC and the NWSL. Either way, there are only positives to take away from the new WPSL Canada league. This league is very important to giving Canadian women’s soccer players playing time, especially when this league plans to turn pro.