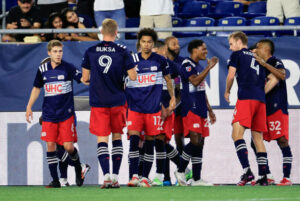 Fresh off of a loss to Ronny Deila’s NYCFC, the Revolution travel to Subaru Park where they’ll face the defending Supporters’ Shield champions. They, like their opponents for this evening, suffered defeat last time out and so will be seeking revenge. Are New England the team to dethrone Philly and hoist the Supporters’ Shield aloft?

Jim Curtin’s men have struggled recently, winning just two of their last eight games. The two victories were at home over NYCFC and Toronto FC, 1-0 and 3-0 respectively. Included in this barren run were three losses, one of which came against tonight’s opposition. Last time out they faced DC United who have been reinvigorated under Hernan Losada, the 3-1 win being one of the most complete performances of the season for the team from Washington.

Onto the Revolution and their standings in the race for the Supporters’ Shield tells you all you need to know about their form. A Taty Castellanos brace may have been the difference in their last outing but that was in the absence of a number of key players. Carles Gil has returned to training but will remain on the sidelines for this one, Brandon Bye, Tajon Buchanan and Matt Polster being amongst the others to miss out. Argentinian striker Gustavo Bou started on the bench following the All-Star game and whilst he did enter the fray at half-time at Yankee Stadium, he was unable to make an impact going forward.

Bou has been the headline act upfront for the Supporters’ Shield leaders but Pole Adam Buksa certainly contributes too, even if his finishing does leave something to be desired at times. Talking of his nationality though and Buksa is away with Poland in World Cup qualifying, playing alongside THE Robert Lewandowski. Buksa was on target last night as his country beat Albania 4-1, the other two players away representing their countries for the Revolution being goalkeeper Matt Turner (USA) and Tajon Buchanan (Canada).

In terms of the Supporters’ Shield holders and they are without a few more players than their Eastern Conference counterparts. Both Andre Blake and Cory Burke are representing Jamaica in CONCACAF, Olivier Mbaizo (Cameroon) and Jamiro Monteiro (Cape Verde) are over in Africa, Daniel Gazdag is a part of the Hungary setup that got swept aside by Southgate’s England last night and finally, Jose Martinez is with the Venezuelan national team. This could see Curtin call on a few players from the plethora of young talent available to him, Paxten Aaronson brother of Brenden and Jack McGlynn being amongst these.

Whilst Bruce Arena’s men are coming off of a defeat, the race for the Supporters’ Shield is still well in their hands with seven points separating them from the Sounders in second. Meanwhile the Union are amongst the pack that need to keep going at a similar pace to avoid the likes of Columbus and Atlanta United catching up before the regular season concludes.

It promises to be a lively and fascinating affair even if your Matt Turners and Andre Blakes are absent, maybe the presence of back-up goalies on the field could lead to a high-scoring affair, who knows?

The post The Supporters’ Shield leading Revolution look to bounce back against Philly appeared first on Last Word On Soccer.