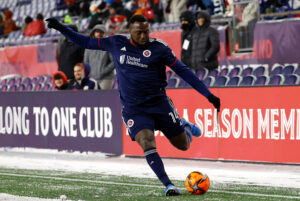 Foxborough, MASS – Yet another international break has now come and gone and this one was quite a blessing for the New England Revolution. This squad suffered arguably its toughest run, in early March, but they have had an opportunity to become revitalised. It doesn’t get any easier for the Revolution though as the New York Red Bulls stand between them and get back to winning ways.

Will the Revolution be able to bounce back?

Without wanting to labour the point, it has to be said that the Revolution suffered various setbacks prior to this season kicking off. In his pre-match press conference, Bruce Arena said that “we’ve had, I think, the hardest preseason and early season kind of schedule I’ve had in my career. We have not been able to have any kind of rhythm.” This lack of rhythm has been apparent on the field whether it be down in Mexico City, or in the late collapse vs Real Salt Lake.

Coach Arena was clearly trying to stay positive when talking to the media, even though the weather still isn’t playing ball so to speak. “We have had a little bit more success of weather here in Boston, but it still hasn’t been perfect. We can’t train on a regular basis outside, so that continues to be a concern in trying to move the team forward.”

So much for Spring…

After talking about leaving the poor run of results in the dirt, forward Jozy Altidore highlighted that “it’s all about getting back to work Saturday, starting on the front foot and enjoying a few weeks here where we can try to get things back on track.”

On top of this, both the Revolution manager and player praised the success of the USMNT in qualifying for the World Cup along with Altidore specifically shouting out to one teammate: “huge congratulations to Adam [Buksa] and Poland. That’s spectacular what they’ve done there.”

Moving on to the task at hand for the Revolution though and in this favourable month or so of fixtures, the Red Bulls certainly pose the biggest threat. “They have their Red Bull-style of play that they are quite efficient in terms of their pressing game” were the words of Arena on this weekend’s opponents as well as praising their manager Gerhard Struber.

Since the Austrian has arrived from England, it wasn’t an instant impact but this year particularly, he has a very well-drilled squad available to him and deserves such plaudits.

Both Bruce and Jozy were previously with the Red Bulls organisation, the latter answering this when asked if he approaches these games any differently; “no, it’s always nice to play against them. It’s always a good game and it was my first club so there’s always some friendly faces there that I’ll see.”

Beyond the sentimental look of this fixture, the American striker was keen to stress the need to stay focused on getting three points on the board. Whilst the Revolution have just one win to their name thus far in MLS play, the Red Bulls have two wins as well as a draw. The side from New York began the 2022 season by putting three past San Jose and then four past San Jose.

Since then, they have been less explosive as Minnesota beat them in their own backyard. Their most recent outing saw late drama as Tom Barlow gave the Red Bulls the lead with just a few minutes left, only for Darlington Nagbe to equalize deep into added time.

The Revolution – player for player

A prevalent issue for the Revolution and Coach Arena has been absent players. The key trio at the heart of the defence, these being Matt Turner, Henry Kessler and Andrew Farrell have all been sidelined with only the latter managing to get any significant minutes under his belt this term.

He may be Arsenal-bound but goalkeeper Turner of course remains instrumental in this group. On his status, Bruce seemed hopeful: “he’ll probably be training in the next week or two. We have to wait and see when he’s cleared by the doctors, but he’s making progress.”

Further up the field and the three DPs have been on the field more often than not. The Revolution hasn’t necessarily reaped the rewards from this though. Between them, strike pairing Adam Buksa and Gustavo Bou have zero MLS goals to date due to a lot of wasted opportunities.

The Pole did net a brace in the first leg of CCL against Pumas but it is the captain, Mr reliable, Carles Gil, who leads the team in the scoring charts having netted from the penalty spot against both FC Dallas and Charlotte.

For the @NERevolution probably “El Capi” in Carles Gil pic.twitter.com/gZGRNhX0OJ

Farrell will hopefully be back in the mix for the Revolution, allowing Jon Bell and Omar Gonzalez to take a collective sigh of relief after some very difficult minutes together at the heart of defence.

Earl Edwards Jnr will surely continue in between the sticks and it remains to be seen what sort of health Kessler is in. Lewis Morgan has been a thorn in the side of many teams playing against the Red Bulls. If Morgan is up to his usual tricks, the Revolution will have to score a goal or two if they are to prevail.

Games coming up for the Revolution

As previously mentioned, there are some favourable fixtures to come with this not being one of them. There is a chance for revenge against Charlotte as well as two meetings with Phil Neville’s hapless Inter Miami.

For now, the Revolution needs to focus on bringing back the positive vibes and getting a result against this Red Bulls team. The game can be watched on MLS Live on DAZN, TV38, MyRITV & CoziTV, and MSG on April 2 at 7:30 p.m. ET.

The post The Revolution look to get back to winning ways against an in form Red Bulls appeared first on Last Word On Soccer.