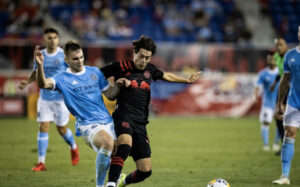 It’ll take some time before you see another Hudson River Derby as wild as the one the New York Red Bulls and NYCFC just played Wednesday night. It might happen when the two rivals square off on Saturday, in three days time. As they say in some parts, it was a proper derbyat Red Bull Arena.

You couldn’t have asked for more over those 102 minutes, it had it all. Over 40 fouls between the two sides, more than 25 shots, big saves by both keepers, eight yellow cards, two red cards and a penalty given by VAR.

NYCFC will feel cheated out of three points they deserved after thoroughly outplaying the hosts. Maxi Moralez notched another assist, laying one on a plate for Valentin Castellanos to slot home after a poor giveaway by John Tolkin in midfield. From that opener in the 31st minute, there seemed to be only one winner as the match went one. NYCFC had another goal ruled out via offside and then saw Keaton Parks sent off. The rough challenge on substitute Dru Yearwood gave the Red Bulls renewed hope. Following more tackles and a bit of time wasting, eight added minutes were given.

Then VAR came after a handball in the box also gave Maxime Chanot his walking papers, Patryk Klimala scored the ensuing penalty to send Red Bull Arena into a manic frenzy. And yet, the 1-1 draw only helped NYCFC who maintain third place in the Eastern conference.

Derby Impact on the Red Bulls

So what did it do for the Red Bulls? It made their playoff push much more difficult.

For starters, they play NYCFC again at Yankee Stadium. Even without Parks and Chanot, the task remains arduous as they need to be better to keep their hopes alive. And by better, that means winning at Yankee Stadium, winning on the road which has only happened twice all season. The 1-1 draw didn’t move the Red Bulls up or down a spot in the table. The Red Bulls finish September at home against the Philadelphia Union, who they’ve yet to beat this season. Jim Curtain’s men will be looking for maximum points too, clinging onto the last playoff spot.

One little thing that’s in the Red Bulls favor is that they have two games in hand of some of the teams above them. They have another six-game month in October, which includes the rescheduled match against Inter Miami. But it’s very difficult to see a path for this young team, the youngest in all of MLS, to make the postseason. The game against NYCFC was played exactly like two teams who are 12 points apart in the standings. Furthermore, the match showcased the transfer business that needs to happen in the off-season. But we’ll save that fun chatter for another time.

It’s about the here and now. And right here, right now the Red Bulls are playing exactly like the youngest team in Major League Soccer. Out of the 24 matches, just seven wins, they’re learning how to win on the fly. But the six draws have been brutal, and the 11 losses this year are currently tied for fifth-most in the league. Simply not good enough, the growing pains are to be expected but it’s been frustrating to watch.

Only 10 matches remain, nine are against teams above them in the Eastern conference. Games against, NYCFC, DC United, Atlanta United and Nashville await them. It’s a mammoth task for Gerhard Struber and his group of players to muster the effort and results required to keep playing deep into November.

It’s all in front of them.

The post The Red Bulls playoff push got much harder following 1-1 NYCFC draw appeared first on Last Word On Soccer.