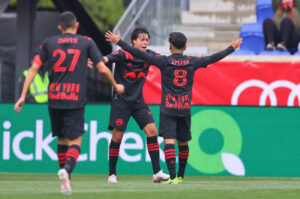 HARRISON, NJ – Gerhard Struber’s side has won two straight games after a shaky tough to the season. The New York Red Bulls midfield diamond has been consistent and the driving force in this team.

The opening theme of this season for the Red Bulls was transitions and integration. How new players were going to be utilized and what manager Gerhard Struber was going to do to get this team ticking. The 4-4-2 diamond formation is here to stay and the midfield pieces are what is elevating the squad’s performances as of late.

Two victories on the bounce has given the Red Bulls a spring in their step after losing the opening two contests. At heart of these wins is wonderkid Caden Clark pacing the team with 3 goals. The youngster who doesn’t turn 18 years old until later this month, has shown the tools required to be a star in the making. His goal against Toronto FC was one of quick instincts in which he has routinely found himself in goal-scoring positions in the box.

Versus the Canadian outfit, the midfield diamond found a bit of consistency and mixed it with its usual tenacity and relentless pressing. Struber made only one change (Brian White for Tom Barlow in attack) but kept the center of the park the same with Clark, Cristian Casseres Jr, Frankie Amaya and Captain Sean Davis at the base.

Indeed it was Amaya who opened the scoring after a turnover where Clark picked up the ball, passed it to striker Fabio who laid it off for Amaya who converted on the one-time strike. That sequence shows the value of the long ball pass, where if it falls kindly there’s an attack setup with the chance to score. If you lose possession then the team can swarm and cause a turnover in an advantageous part of the pitch.

When you break down the components of the midfield, there’s a lot to like. Casseres is a tackling machine who has come up with two goals, Amaya has versatility and is able to find teammates in space, Clark has been a great number 10 linking attacks together while Davis has a nonstop motor getting stuck in and keeping possession.

A big night for Frankie Amaya, who scored his first #RBNY goal in a 2-0 win over #TFCLive.

What is also impressive is the depth coming off the bench. Dru Yearwood has filled in serviceably as a substitute with his range of passing. Omir Fernandez, who operates more as a winger is now serving as a more of a No. 10 and once Youba Diarra comes back from injury, his ball-carrying and application will be a welcome sight.

The second half of the game is where the Red Bulls took advantage of tired Toronto legs after their midweek exploits. Wave after wave of pressing, counter-pressing and creating chances to put the game away. Teams with higher quality will eventually find the answers to combat this team but the Red Bulls have a formula in which to play.

No goals, no problem so far for Fabio:

This isn’t a break glass situation, Fabio has simply been unlucky to not get on a scoresheet. But he is key in the system as he wins long ball duels and uses his physicality in the box. He’s one of the tallest forwards the franchise has ever boasted and will soon enough score goals thanks to the midfield behind him.

There’s no concern that Fabio has yet to score, says Struber. For the system to work, #RBNY needs players like him. Adds that the Brazilian, he can save balls in the last third, and needs a little luck to score. He tires out the defense and works hard in both directions.

Three assists early on in the season is unexpected and of course strikers want to score but its always good to see strikers become providers. Whether it’s chasing balls in the corner flag to bring others in the attack or winning aerial duels, Fabio is proving to be a fun piece of this very young squad. Now it’s on to the road for the New York Red Bulls as they take on the Philadelphia Union Saturday, May 15 at 7:30pm ET.