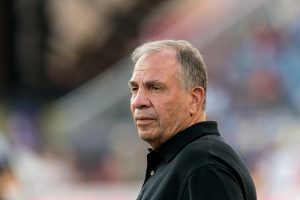 It is no secret that for a number of MLS teams, this final game of the 2022 season is meaningless. One such fixture is the Revolution vs Chicago, with the pair already eliminated from playoff contention. That being said, both sets of players and coaches will be intent on finishing the season with a win.

The Revolution vs Chicago Is a Dead Rubber

Ending on a High Note

The night before the win over Atlanta United last weekend, the New England Revolution found out they were officially out of the running for a playoff spot. It remains to be seen what impact that had on the performance as Bruce Arena’s men ran out 2-1 winners all the same, thanks to goals from Giacomo Vrioni and Gustavo Bou.

In terms of the outlook for this one and Arena is able to go into the Revolution vs Chicago clash with a clearer head. “I actually look forward to the game. I think over the last couple of weeks, we’ve gotten closer to having a full roster and that’s good to see and we can see a few things that will help us as we move into 2023.”

Bruce Arena when asked if he’s happy the New England Revolution’s disappointing season is about to end:

“I’m not going to miss this season, to be honest with you.”

It would seem fair to assume that this weekend’s clash is an opportunity for some younger players to pick up more minutes. The likes of Damian Rivera, Noel Buck and Esmir Bajraktarevic certainly haven’t been overused and that may well remain the case if coach Arena’s answer on this topic is anything to go by.

“We know what our younger players are capable of. We see them every day. We see them play either with us or we see them in Revolution II games, so we see our players. The way we approach every game is to try to win the game, so we’ll put a team on the field on Sunday that can win in Chicago.”

Read More: The Revolution Are Saved by Djordje Petrovic Once Again

Revolution vs Chicago In Seasons Gone By

New England Revolution vs Chicago Fire has been a regular fixture even through the pandemic due to it being an Eastern Conference rivalry. Both teams have had their highs and lows with this season fitting into the latter category at both ends of the stick.

This duo went toe-to-toe, just last month, on September 1st. It ended goalless, but that isn’t the half of it. Tommy McNamara saw a goal disallowed at one end whereas Djordje Petrovic, the team MVP, saved a Chris Mueller penalty at the other end.

The best Young GK in MLS

Two of the three Revolution vs Chicago matchups in 2021 also saw the spoils shared. Gustavo Bou found the back of the net both home and away in 2-2 ties whereas the single outlier, was a 3-2 Revs win at Soldier Field. The team had a slightly different look to it, the first two goals coming from Henry Kessler and Teal Bunbury. Captain Carles Gil stole the game at the death!

On the topic of defender Henry Kessler and he spoke on the challenges of staying focused even with the lack of jeopardy involved here. “I feel like there’s always something to play for and as a team, we want to finish on the right note. Personally, I like would love to have a good performance to end the year as well. So, for me, it’s not difficult to stay motivated.”

This hasn’t been a good season on the field in New England but a lot can be learned from it all the same. Here is to a strong conclusion in Illinois and then a much better 2023!

Stay tuned not only for the low-down on what Djordje Petrovic had to say in the press conference, but also an exclusive one-on-one interview with midfielder Matt Polster.

The post The New England Revolution vs Chicago to Cap Off a Below-Par Season appeared first on Last Word On Soccer.