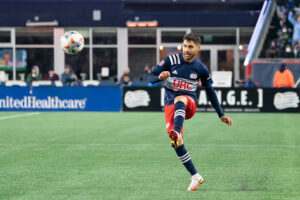 PREVIEW – After what feels like a particularly short off-season, MLS is back! The defending Supporters’ Shield champions are of course the New England Revolution, and their campaign will get underway in Oregon. The Revs will face last year’s MLS Cup runners-up Portland in a huge fixture- a long-awaited return to the West.

Portland hosts the New England Revolution to get the season underway

Both teams have had their own disruptions in recent weeks. New England was supposed to kick off the CCL with a tie versus Haitian side Cavaly FC but due to visa issues, the minnows were unable to fulfil the fixture. Whilst the New England therefore advance, the Timbers are in some muddy water of their own.

Not only has stalwart Diego Valeri departed, but in more pressing issues, the club is under investigation from the league. Portland reportedly failed to report domestic violence allegations that were pending against player Andy Polo and so this misdemeanour is far from an ideal starting spot.

How did 2021 go for the New England Revolution and the Timbers?

As previously mentioned, both the New England Revolution and the Timbers had things to shout about last year. The former, led by Bruce Arena, broke the regular-season points record of Bob Bradley’s LAFC, before then coming up short in the playoffs. The Revs were bested by NYCFC and the same goes for Portland, only they were overcome at the final hurdle. Ronny Deila masterminded the New Yorkers to a first MLS Cup in the Timbers backyard, Providence Park.

Will @NYCFC make it back-to-back titles?

Talking of Providence Park and this will be the location for a Saturday night classic. From LAFC versus Colorado to Atlanta versus SKC, there are a number of fascinating fixtures in this opening weekend of MLS, and the game in question certainly fits the bill too.

The tale of the tape and the squads

The team from Boston last faced Portland all the way back in September of 2018. The pair met at Gillette Stadium and it ended 1-1, with second-half goals coming from RSL new-man Scott Caldwell and Kenyan Lawrence Olum. They haven’t met for so long due to the pandemic limiting matches to within their own conference. This isn’t an issue in the mind of Arena, or so he joked anyway when he said “given the circumstances in Boston I don’t think it’s as challenging given that I think there’s eight inches of snow.” He then went on to, more seriously, say “we’re playing on the same surface we have in Gillette so we’re not as handicapped as one might think.”

Diego Valeri may have departed Portland but Sebastian Blanco remains a key part of Gio Saverese’s plans. On the other hand, a lot of key faces have stayed put in New England. Of course, Tajon Buchanan has gone to Belgium plus Matt Turner will be moving on in the summer, but besides that, the stars are still under Bruce’s stewardship. Jozy Altidore, Sebastian Lletget and Omar Gonzalez are the trio of new faces, all of whom have worked with the Revs manager previously.

Sebastian Lletget is heading to the @NERevolution!

Goals of the New England Revolution

New England will go in search of a first-ever MLS Cup this term whilst also competing for the Champions League. No MLS side has ever lifted the latter and so it is a joint feeling across the league that, if anyone can get over the line, that is better than nothing. This sentiment was reiterated by Altidore when he spoke to Last Word on Soccer last week as well as Arena in today’s presser: “we [MLS] have four teams remaining in the last eight so hopefully we can advance teams into the semi-finals and certainly be competing to win it all. It’s something we need to do as a league, I think just getting an MLS representative into the world championships would be an important next step for the league.”

There are questions over who Arena will go with from the start at Providence Park. Will there be a back five or a back four? On top of that, there was talk of Turner having maybe picked up a foot injury. As is often the case though, the New England Revolution manager was keen to keep his cards very close to his chest when it comes to team selection: “I’m not interested in talking about ant injuries to the players, we’ll have a line-up set later today for tomorrow and we’ll leave it at that.”

It is hard to talk about the Revs without zeroing in on the reigning MVP Carles Gil. He won the award despite facing injuries last year, he seems to be in good spirits about his health though: “I feel good, I feel perfect at the moment. You never know with the injuries but hopefully, I can have a full season [without injury].”

“I feel perfect in the moment”

Complacency is an issue faced by many championship teams but the general vibe from the camp has been that this is a new year and everyone is looking to further add to their success, as opposed to resting on their laurels. “We’re trying to continue in the same light as last year. It’s a similar group with many players that were here last season, everyone knows Bruce and we know Bruce and also we have some very good new players.”

Finally, on the winning of that award and Gil mused that his “goal is always to be better than last year” and that it is about “trying to help the team, the most important thing is the team. When the team is playing good and winning games, everyone are better players.”

The game will take place at 7:30 p.m. ET on Saturday in Portland, Oregon. Click here to read Last Word on Soccer’s predictions for the 2022 MLS season!

The post The New England Revolution visit Portland for their season opener appeared first on Last Word On Soccer.