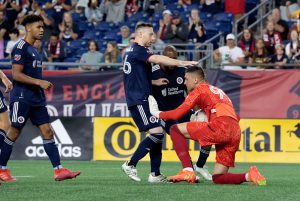 New York City FC have looked like a different side following the departure of both Ronny Deila and Taty Castellanos to Europe. That being said, they have got the better of the New England Revolution plenty of times before. This was not the case at Gillette Stadium last night, a game full of headlines in favour of the hosts ensued.

Bruce Arena made just one change to the side that drew 0-0 with the Chicago Fire in mid-week. Jeff Lemieux reported before the game that Brandon Bye’s exclusion “was a game-time decision” and that it is a “minor leg injury”. Entering the fray in the place of Bye was Jon Bell. He started as left-back whilst DeJuan Jones shifted over to the right.

Whilst some may have thought that Bell was being played out of position here, Brad Feldman clarified on the New England Revolution broadcast that he prefers that, having operated there in college. Here are the player’s thoughts on this decision. “It was like taking a trip down memory lane. But, that’s part of the job – be ready for any position, especially as a defender.”

On the flipside, NYCFC and Englishman Nick Cushing made a quartet of changes to the starting XI. Last time out, Wayne Rooney’s D.C. United overcame the defending Supporters’ Shield champions thanks to goals from Ola Kamara and Steve Birnbaum. Anton Tinnerholm, Malte Amundsen, Gabriel Pereira and Talles Magno all made way for Vuk Latinovich, Andres Jasson, Thiago Andrade, Maxi Moralez.

All three goal scorers for the New England Revolution could easily have written the headlines themselves. The first man to react to a loose ball in the NYCFC box was Jon Bell of all people. He rather enjoyed opening the scoring. “When I got it, I was pretty hyped about it. I made sure I looked at the refs first, because I was not trying to celebrate and look stupid. So, it was a good goal for me.”

To make it even better for the defender, Kanye West was booming out after the opener. “Hearing that song hyped me up a little bit more, gave me a new life for the rest of the game.”

Then, after some neat work from Maciel, Noel Buck fired a second home from distance beyond Sean Johnson. The 17-year-old opened his account for the Revs on just his second MLS start, and he continues to come on leaps and bounds. Here are his thoughts on the goal. “I don’t remember like anything really. I think the one point I do remember is right after it went in, I didn’t go celebrate right away.” Meanwhile, Tommy McNamara labelled him as “a special talent.” Going on to say that Buck is “Very mature for his age; very confident.”

TOMMY MAC ON THE ATTACK!!! pic.twitter.com/xTCqPhliJf

Talking of McNamara and this was a big fixture for him. The New Yorker played for NYCFC from 2015 to 2018 and was a key part of the growth they’ve experienced to this point. A mix of non-existent defending and opportunistic finishing from McNamara led to the third goal, the hammer blow. The icing on the cake for the New England Revolution in what is a massive result.

The Final Stretch For The New England Revolution

This is a major step for the Revs but the games on this run-in continue to come thick and fast. They have played a game more than Inter Miami and FC Cincinnati below them but however you look at it, Arena’s men are back above the playoff line. The following isn’t exactly a revelation but to hear the manager say it is intriguing: “I would say that without Carles Gil, we wouldn’t be where we are today.”

Coach Arena went on to discuss these last five games. “We know it’s going to come right down to the wire, but that’s certainly what our goal is. If we get our team healthy in October, we’ll be pretty good. We have not been healthy the whole year. We’re slowly getting players back and that will help us.”

Next up for the Revs is a visit to the big apple as they will this time face the Red Bulls whilst NYCFC host Cincinnati on Wednesday night.

The post The New England Revolution Make Light Work of NYCFC at Gillette! appeared first on Last Word On Soccer.