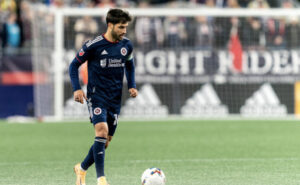 Foxborough, Mass. — It was perceived wisdom that the international break would provide a welcome reset period for the New England Revolution. A cagey affair against the New York Red Bulls would be decided by an own goal at the death, continuing this turgid run of form. That is arguably the toughest fixture that the Revolution have this month though with attentions now turning to a trip to Miami.

A tale of two struggling sides

There aren’t many teams that are underperforming more in MLS currently than the New England Revolution and Inter Miami. The latter are one of only two sides, along with the Quakes, yet to get a win in 2022. They have lost four of their opening five games, scoring a mere three goals whilst conceding 13. It was on opening day when Phil Neville’s men earned their solitary point thanks to a 0-0 draw with the resolute Chicago Fire.

On the other hand, the New England Revolution are on a four-game losing streak in all competitions, their last victory coming in Champions League. They of course beat Mexican outfit Pumas 3-0 on home soil before losing the second leg by the same score-line. In between those two games was a dramatic defeat at the hands of Real Salt Lake, the subsequent losses occurring against new boys Charlotte FC and most recently the Red Bulls.

“I think we gave away two games so far this year, the Salt Lake game, and the Red Bulls game. Games where at the very least we walk off the field with a point, so I think good lessons to be learned,” Arena said.

The Red Bulls game was decided by a calamitous own goal in the dying embers of the match, despite the fact the New Yorkers had ten men after Frankie Amaya saw red in a very physical performance.

What threat do Miami pose?

It would be easy enough to overreact and say that the New England Revolution have lost what they showed last year. Whilst it is key to start over again and treat this as a new season, the chances are this is just a rough patch as opposed to anything more severe.

“It’s a long season,” Arena said. “These seasons go every which way, very rarely do you have identical seasons back-to-back, so we were facing adversity at the start the season, but that’s not the worst thing. I’d rather have that happen now than later.”

Inter Miami are down 0-2 to Houston..

They’re bottom in MLS in both points (1) and goal difference (-10). pic.twitter.com/5eajDDzf5d

One thing that Miami do boast when it comes to the home advantage is the climate and the weather. The US is so vast that there are a range of conditions that MLS teams have to play in. The New England Revolution can attest to this following snow games against RSL and Pumas.

“I think the game Saturday will be a little bit unique for so far this year with the temperatures around 80 degrees. We’ve been playing in snow and in elevation and all of that. So, this is a new challenge as well, but it’s all part of playing in MLS,” Arena said.

Alongside the weather, Miami are a team desperate for points. They are of course playing very poorly at the moment and this is reflected in their results, but all the more reason for them to be vying to bounce back. The New England Revolution may view Miami as a team against which they can get back to winning ways, but this goes both ways. No team in this league should be overlooked or undermined.

Who can make the difference for the New England Revolution?

There have been a number of injuries to contend with for the Revs. A fair few of which have come in the defensive third. Henry Kessler and Andrew Farrell were back in action last weekend against the Red Bulls. Meanwhile, the Arsenal-bound Matt Turner will soon be back on the field too.

“He’s a very good keeper, very important for us. I think Earl [Edwards Jr.] and Brad [Knighton] did a very good job. We miss every player who’s injured, and Matt, too,” Gil said.

In the last match, Adam Buksa began on the bench whilst Gustavo Bou didn’t even make the 18. The Pole came on only to be sent off in controversial circumstances, meaning he will of course be absent from this one. This presented an opportunity to Justin Rennicks who started alongside the experienced Jozy Altidore. While there was a lack of any real attacking impetus, he certainly displayed the necessary desire and fight.

“I think it’s an important moment for him,” Gil said about Rennicks. “He’s learning year by year. I think he’s prepared to play in games and help the first team in MLS… I think he’s ready and he can help us.”

If this was the New England Revolution of 2022, most onlookers would be tipping them to romp past this dismal Inter Miami team. This isn’t the case though as both come into this one in desperate need of a result and a positive performance too. Who will prevail down in Florida?

The post The New England Revolution Have to Win Down in Miami, Right? appeared first on Last Word On Soccer.