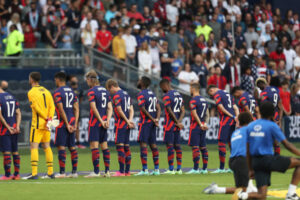 EDITORIAL – The United States Men’s National Team won their first group stage game of the 2021 Concacaf Gold Cup on Sunday. Other than the fact that it was a win, it wasn’t great. Sam Vines scored the only goal in a 1-0 win over Haiti. The performance, collectively and for many individuals, could have been better. Gregg Berhalter had a lineup that had much of USMNT Twitter frustrated. Let’s take a look at what happened and what it means for the match against Martinique tomorrow.

The lineup had some curious decisions. Shaq Moore started at right back with Reggie Cannon unavailable. Jackson Yueill and Jonathan Lewis started and were not good. Gyasi Zardes was at center forward. Daryl Dike and Gianluca Busio did sub into the game in the second half and looked good.

I think there was some logic to Berhalter’s lineup. It was the first game of the group stage. Getting a win was the most important thing and playing players who are (mostly) known quantities at the international level was the safest option. It’s just one game. The plan for the Martinique and Canada games could very well be to play some of the fringe players who were called up to be evaluated.

That said, several of those players who did start did not play well. They have not played well for awhile. Lewis got the start despite not starting regularly for Colorado Rapids. He was a non-threat at left win. Yuiell again struggled on the ball in key moments and did not do enough defensively when Haiti counter attacked. This is a continuation of his performances in June. Busio came in and was all the things Yuiell was not. While Vines scored the goal, he was otherwise underwhelming.

All the players mentioned above are on this Gold Cup roster to be put in the shop window for Berhalter to evaluate. Several of them squandered an opportunity on Sunday night. One can only hope that the USMNT lineup decisions reflect Berhalter giving players who are more of an unknown a chance show what they can do. Give them a chance to be evaluated.

Berhalter knows what Zardes, Sebastian Lletget, and Paul Arriola can and cannot do at this point. Acosta is increasingly showing he’s a capable backup midfielder for the European-based midfielders. Yuiell is increasily showing he is not. Moore gave Berhalter something to think about given the situation at the fullback position.

Dike, Busio, and Matthew Hoppe should be given playing time. If Berhalter continues to play players who have been poor for club and country, one has to start wondering what the point of the Gold Cup is. And what is happening in training that isn’t translating to games. The continuation of a disconnect like that isn’t going to get this nation back to the World Cup next year.