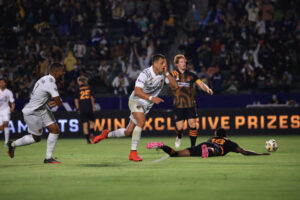 On what should have been a night of celebration to honor Central American Heritage Night in commemoration of 200 years of independence, the Los Angeles Galaxy gave the 15,341 fans in attendance at Dignity Health Sports Park little to cheer about in their 1-1 draw against the Houston Dynamo.

With some of the biggest Central-American legends of Galaxy teams past like Carlos Ruiz and Jaime Penedo looking on, the Galaxy could not break the deadlock against Houston and tied their third game in a row after last Saturday’s draw in Colorado.

The Galaxy was forced to come from behind again, as Houston winger Fabrice-Jean Picault got in behind Galaxy defenders Daniel Steres and Sega Coulibaly on 12 minutes to poke home a shot just past Galaxy Keeper Jonathan Klinsmann’s left side.

The Galaxy did little the rest of the first half to trouble Houston and came out of halftime with much the same energy to start the second.

Better in the second-half

The halftime introduction of Dejan Joveljic for Efrain Alvarez and the substitution of Victor Vazquez for Sebastian Lletget proved to be the shot of invention and energy Los Angeles was missing.

“Our response is the most positive thing about the game that we take,” Javier “Chicharito” Hernández said of the second-half effort. “The response, the way that the players who came in made a very big impact.”

Any doubt whether Joveljic and Chicharito would be able to play together was quickly put to rest as the pair connected for the Galaxy’s game-tying goal and Chicharito’s 11th of the season on 61 minutes.

Let this goal by CHICHADIOS bless your timeline

With Joveljic collecting the ball on the left side and both forwards locked in on each other’s eyes, the Serbian striker sent in a perfectly placed lofted ball of the kind that seems made for Chicharito.

In basketball speak, Hadebe got dunked on.

The goal galvanized the Galaxy and made fans believe they could win all three points for the first time that evening.

A great-headed chance on 87 minutes by Chicharito went wide left as the forward could not adjust his body enough to score his second goal of the night.

Try as they might, the Galaxy wasn’t able to score the winning goal that their final 30 minutes merited.

A lack of urgency

“I felt like just the intensity in the first half was just way too low. It was too easy for the opposition. Too many sideways passes, back passes. Everything took too long. The intensity to win balls and recover balls, their goal comes off of a second ball,” Vanney said of the performance. “Being at home and this being such an important start, the intensity level at the beginning was just too… didn’t have enough urgency, right?”

The lack of urgency saw the G’s drop two more points at home, where they haven’t won since the 1-0 victory against Real Salt Lake on August 4. In the last four games at home, a place the team has tried to make a fortress, Los Angeles has only earned two of 12 points.

The Galaxy has not won at all since their August 14 away match at Minnesota in a 5-game stretch where they’ve only picked up three of a possible 15 points.

The most recent stalemate leaves Los Angeles in 4th place, four points above Portland with 10 games left in the business end of the season.

Now “unbeaten in three games,” the Galaxy faces a trip to Minnesota on Saturday, where they’ve already won this season and the last place they won a match.

Perhaps they can use the memories of the last Minnesota trip to stay unbeaten, but with a win instead of a tie.