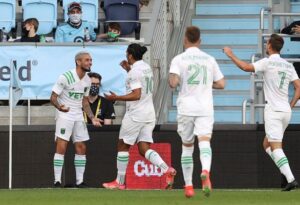 ST. PAUL, MN – Good teams win when they play well. Great teams win when they don’t. It’s far too early to label Austin FC a great team, but they certainly have something about them. Austin FC didn’t play badly during their first-ever visit to Allianz Field, but it wasn’t quite the free-flowing attack witnessed in the second half against Colorado last weekend. Instead, they had to demonstrate patience, discipline, and some real grit. In doing so, they were able to make the most of their 16th-minute lead, carrying it through to the final whistle against Minnesota United. It led to the first ever Austin FC clean sheet.

Jared Stroud was again the architect of ATX’s opening goal, bending in a cross from the right-wing. Diego Fagundez was the lucky recipient, just as he had been in Colorado. He tucked away the opportunity with similar aplomb. Austin created several other great chances in the first half and again in the second. Hoesen, Stroud, Gallagher, Ring, and Redes with the pick of the bunch; no one quite able to match Fagundez’s clinical finishing.

Minnesota United crafted several decent chances of their own, but were only able to put two on-target the entire night. Brad Stuver fashioned a ‘Wonder Wall’ of his own, refusing to give up the first clean sheet in the club’s history. He was helped in no small measure by his determined defense, chief among them Jhohan Romaña.

The young Colombian, playing only his 3rd MLS match, threw himself in front of everything, thwarting the dangerous Emanuel Reynoso and, later, Patrick Weah. The teenager, son of former Ballon d’Or winner George Weah, posed a real attacking threat when he entered the game late on. Romaña and co were equal to the challenge, securing another precious Verde victory.

He did it again.

Skipper Alex Ring acknowledged the difficulty of the task. “When you didn’t kill off the game, you’re going to have to deal with pressure like that. But in games like this where we prevail, this is going to take us further. But the message is we take our chances and kill games off sooner.”

Coach Josh Wolff was happy overall with his team’s performance, though shared Ring’s assessment on taking their chances. “I think we could’ve been one or two more goals up at the break, and we obviously had great chances late on.”

Wolff was particularly impressed by his team’s spirit this evening. “What I’m most proud of is the guy’s ability to grind. It’s hard on the road, and we have 8 games on the road to start our season. It’s only going to get more challenging as we play some of these other teams we have coming up. So, I’m really proud to get the 3 points but really proud to pitch a shut-out in Minnesota which isn’t easy to do. I think we deserved the win coming here and playing the way we played and creating the opportunities we did.”

Stuver is Steadfast: A determined display by the ATX defense made all the difference, and goalkeeper Brad Stuver deserved his and the clubs first-ever Verde clean sheet

Finish better to finish earlier: That they are creating chances is cause for celebration. Not finishing more of them is cause for concern, though. In particular, attackers Danny Hoesen and Jon Gallagher will feel better once they finally get off the scoring mark.

Fagundez forces his way into the starting XI, and the fans’ hearts: First-ever Austin FC goal last week. Game-winning goal this week. Diego Fagundez is fast becoming a fan-favorite, as well as an important cog in the Verde midfield machine.

With two wins from their opening three games, all on the road, Austin FC has to be pleased with that return. With another 4 consecutive road games to go before ATX finally gets to play their home opener, the Verde are going to have to continue to dig deep to earn every point.

The post The First Austin FC Clean Sheet Leads to win in Minnesota appeared first on Last Word On Soccer.