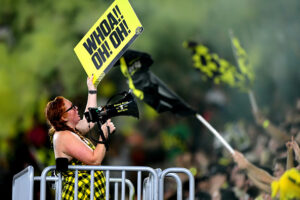 The Columbus Crew continue their downward slide as their losing streak is now at three. During this streak, the crew have given up 11 goals, seven of which have taken place at Lower.com field. Before Saturday night, Atlanta United had not won in 12 games. The Crew were decimated by having two goals called offsides. The first would be an equalizer by Luis Diaz in the early minutes of the second half. There are more takeaways from last night’s game. Let’s take a look.

Columbus Crew continue to go into a downward slide

It is hard to win soccer games when you spot the opponent two goals within the first half-hour of the game. That’s the position Columbus has found itself in far too often this year. Atlanta’s first goal came from a creative and masterful through ball in the fifth minute. The next two came from the penalty spot. Neither time did the referee, Allan Chapman, feel it necessary to take a second look at the fouls called via video assistance.

That’s a brace for Barco

Nevertheless, in both penalties, The Crew’s backline looked disjointed. Captain Johnathan Mensah is doing his best to hold the line, but the teammates positioned next to and in front of Mensah, by Caleb Porter, are performing to the standard fans have expected from a Columbus Crew team.

A change of formation might do everyone some good and shake the defense back to life, but looking toward the bench for reinforcements doesn’t exactly ignite much confidence in that sort of decision. Both Josh Williams and Vito Wormgoor have missed more than a month’s worth of games at this point, and any structural change would need one or both of them to solidify any defensive structure.

Offensive opportunities continue to be few and far between.

The Columbus Crew found the back of the net twice within the run of play last night. Unfortunately, both goals were called back because the goal scorer was offsides. Columbus’s first goal occurred just minutes after Atlanta’s first penalty. Mensah tore through the box and got his head on the end of Lucas’s service. The ball tailed away from Atlanta’s Brad Guzan at the far post. A goal was as good as any scored in the world last night.

Beyond that moment much of Columbus’s time in the attacking third left a lot to be desired. First touches were off, passes were misplaced, and runs were very much mistimed. Continuity is important, and it appears that this team does not have much to work with. There is a lack of identity in which The Crew attack their opponents. Often times the only two options are a cross into a double-teamed Gyasi Zardes and Lucas Zelarayan, or Kevin Molino deciding to take on entire defenses. Neither option results in much.

Luis Diaz, like most Crew players, has had an up and down season. At times he can be incredibly frustrating to watch (see his rebound attempt in the 44-minute). That said his speed and tenacity have to be respected by opponents. When he is on, his runs can turn a game around in seconds. We witnessed that early in the second half when the whole crowd thought he equalized the game.

To many fan’s dismay, Diaz went down hard and awkwardly after beating his defender in the 70-minute. Diaz immediately waved for medical assistance and had a very difficult time getting to his feet and off of the field. Dias isn’t one to embellish much and by the looks of how he went down, the prognostics might not be good.

The Columbus Crew is barely hanging on a playoff spot at the midpoint of the season. A late-season run is not out of the question, but the expectation for who this team is and what they can accomplish is under review. Regardless of who we thought this team was at the beginning of the year, what they have become now is very different.

This year’s version of The Crew is not Supporters’ Shield contenders. They may be lucky to host a home playoff game. Are grit and tenacity enough to salvage a playoff spot? Can Caleb Porter adjust what he has in the cupboard to formulate a better attack? The transfer window has come and gone, the front office appears to be content with the pieces already in place. However, whether or not those pieces are good enough remains to be seen.