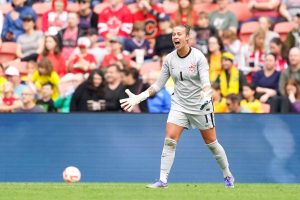 BRISBANE, AU – The CanWNT earns a win at Suncorp Stadium as Adriana Leon scored the game-winning goal. Canada made some great defensive plays and the team and the CanWNT looked very impressive in the second half.

The CanWNT earns a win on the road against the Matildas

The #CanWNT earned themselves some great scoring chances, including Adriana Leon’s goal.#WeCan did well defensively and also with goalkeeping.#WeAreMatildas had great chances to score but were not able to convert on them.#AUSvCAN | 0-1 | #SuncorpStadium

11’ What a goal by #CanWNT’s Adriana Leon! Her shot beats #WeAreMatildas’ goalkeeper, Lydia Williams, and into the back of the net! Jordyn Huitema was credited with the assist. #10FootballAU#AUSvCAN | 0-1 | #SuncorpStadiumpic.twitter.com/KK1aGoXsJy

Adriana Leon scored a terrific goal early on in the 11-minute to give the CanWNT the early lead. Samantha Kerr had a few chances to score but did not convert. Bianca St-Georges had a great game as she defended well throughout the game, including early on.

Goalkeeper, Kailen Sheridan, made a good save on Kerr and Australia’s Emily Gielnik tried to catch the goalkeeper off-guard, but her shot was off target. Leon intercepted the ball in the 31-minute. Sheridan saved a shot from Emily Van Egmond, as the header went straight to Sheridan. Janine Beckie cleared the ball in the 33-minute. Nichelle Prince’s shot was stopped. Beckie made a game-saving play as she cleared the ball that beat Sheridan. Alanna Kennedy’s shot was off target. St-Georges made another good defensive play in the 40-minute.

Nichelle Prince delivered a terrific pass to Christine Sinclair, whose shot was stopped by the Australian goalkeeper. Beckie’s shot was off-target in the 70-minute. Canada was really playing well in the second half. Beckie passed the ball to Nichelle Prince, who put herself into a good position but shot the ball wide.

DENIED AT THE DEATH!

Cloé Lacasse’s shot was stopped. Sam Kerr passed it to Cortnee Vine, whose shot was off-target in the 82-minute. Lacasse put herself in a good position to score in the 85-minute, as Simi Awujo gave her a good pass. Kerr’s shot was quite wide and then Vine’s header missed for Australia. Mary Fowler’s shot was off-target in the 90+2-minute of play. Shelina Zadorsky heads the ball out of the net. Sheridan made a great save on the 90+5-minute of play from Kerr as Canada won the game.

How good was Kailen tonight?!

The CanWNT was able to get a goal in open play as they won a game on the road against Australia. Goalkeeper, Sheridan, stepped up for the CanWNT. The Matildas are ranked 12 in the world, but they did finish fourth in Tokyo 2020. To beat a team of that quality shows that Canada is progressing well in preparation for the 2023 FIFA World Cup.

Both teams will face each other again on Tuesday, September 6 at 5:40 p.m. ET. This time, they will be playing in Sydney, Australia at. Like the previous game, this game will be shown live on OneSoccer.

Australia was able to get behind the CanWNT’s defence but was unable to convert them into goals. Their closest chance probably came late in the first half.

This is what Beverly Priestman said after the game according to Canada Soccer:

“I couldn’t be more proud because, whatever they faced, whether it be travel delays, injuries to the squad and all those sorts of things when the whistle went, they got down to business and delivered. That makes me really proud.” Priestman said. “Keeping a clean sheet against Kerr, that backline did incredibly well, they stepped right up to do that.”

This is the CanWNT’s first game since losing to the USWNT in the Concacaf W Championship Final. It was also Leon’s first game-winning goal since the CanWNT won 1-0 against New Zealand at Saputo Stadium in Montreal, Quebec last year.

Three takeaways as the CanWNT earns a win on the road

“Always nice to get a clean sheet even as an attacker. We saw some new faces out there, some girls got some good opportunity today and they showed really well.”#CANWNT pic.twitter.com/YytwEqnDgK

The Matildas had chances to tie and/or win the game. Australia did have great opportunities to score. Vine for example had a chance late in the game, but her shot was wide and Fowler’s shot late in the game was off-target.

The CanWNT goalkeeper and defence stayed firm. Goalkeeper Sheridan is really establishing herself as the number one goalkeeper for Canada. Sheridan made seven saves with no goals allowed. Her most notable play was when she was able to make a play to prevent Kerr from getting a shot on goal in the first half. Her defence also played well, in particular St-Georges and Zadorsky, who made some great plays. Beckie also made a goal-saving play when Sheridan was beaten.

The post The CanWNT earns a win on the road against Australia appeared first on Last Word On Soccer.