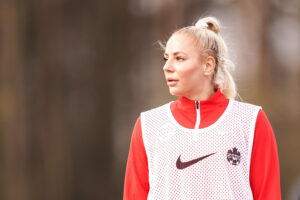 The CanWNT Celebration Tour roster was revealed on Monday afternoon. Head coach, Beverly Priestman, talked about what Canada needs to prepare for as the games will take place on April 8 and 11 in British Columbia.

Canada Soccer’s Women’s National Team are coming to British Columbia…. who are you looking forward to see play live?#CANWNT

It is great to see Leon back in the lineup. The CanWNT winger has played for the national team since 2012. During that time, she had 20 goals in 76 appearances. Her ability to get to the right place and at the right time is a plus for the team.

16’ #CanWNT scores! Fantastic team passing results in Janine Beckie’s shot being stopped. However, Adriana Leon is at the right place at the right time and puts the rebound into the back of the net!#CANvNZL | 1-0 | #CanWNTGold pic.twitter.com/slAOZqEHdG

This is a big reason why the CanWNT won their second Celebration Tour game in Montreal. They also missed her goal-scoring abilities in the Arnold Clark Cup, where they only scored two goals in three games.

Similarly, Christine Sinclair, who was understandably not available in the Arnold Clark Cup, was also missed. She is Canada’s top goalscorer, but she also brings a lot of attention to herself, allowing other players to shine. Sinclair also does the little things, which makes her an all-around player.

In the Zoom call, someone from Canada Soccer asked a question about celebrating the achievement of the CanWNT. This is what Beverly Priestman said:

“If I look at Christine, she’s in her hometown, she’s brought in a record, she’s got a gold medal, and she didn’t get this share that with family and friends at the moment. And so, I think being at home and connecting with our fans is really, really special.”

Also, this Celebration Tour is going to be very important for Labbé. The goalkeeper who played a pivotal part in the CanWNT winning Gold is retiring this year. Her heroics and ability to make saves in big moments is why she was Canada’s best player in 2021. This is what Labbé said about playing in Vancouver according to CBC Sports.

“It’s a big moment for me personally as well and yeah, I’m really excited that it’s on the west coast, Vancouver, you know a stadium that almost feels like a second home outside of Alberta for me, so have a lot of my family and friends making the trip over is gonna be really special.”

Nigeria is currently ranked 39th in the world. However, CanWNT head coach Beverley Priestman will not be taking Nigeria lightly. This is her answer to my question regarding Nigeria and the threats the reigning African champions poses:

“I think watching them they’re more organized than they’ve been before and have enough athleticism and that will compete with ours. I think that’s definitely worth knowing. And, you know, we can’t underestimate them. The games in the past with Nigeria, Canada, Nigeria have been, you know, difficult games. I think in terms of preparing for what we’ve got coming up this summer, you know, there’s tendencies that relate to some of the compact teams that we’re going to face. You know, for example, player to player marketing.”

Priestman would later say that Nigeria is “lethal in transition,” Priestman also talked about getting experience in the African style of playing soccer. These teams have only faced each other twice with each team getting one win apiece. The most notable encounter was when Nigeria defeated the CanWNT in the 2011 FIFA Women’s World Cup 1-0. They also faced each other in 2019, when the Canadians won the game 2-1.

Players to watch from Nigeria

Two players from Nigeria should be highlighted. One is Houston Dash’s Michelle Alozie. She is an American-born Nigerian, who plays the forward position. She made her debut on June 10, 2021, where they faced Jamaica in a 1-0 loss.  The other player is Asisat Oshoala. She was the captain of Nigeria last year in the Africa Cup of Nations. Oshoala plays for FC Barcelona, where she made 45 appearances and has scored 39 goals. Oshoala was also named the Queen of the Pitch (best African player in 2021) according to Premium Times.

Where to watch the games

It is important to remember the roles that players like Jessie Fleming and Leon had for the team. The CanWNT will play against Nigeria on April 8 and 11. The April 8 game will take place at BC Place in Vancouver.

They will then travel to Langford, British Columbia at Starlights Stadium. BC Place is home to MLS’s Vancouver Whitecaps FC while Starlight Stadium is home to defending North Star Shield champions from CPL, Pacific FC. Both games will take place at 10:30 p.m. ET and also at 7:30 p.m. PT. It will be shown live on OneSoccer.