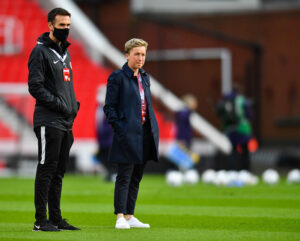 PREVIEW – The CanWNT Arnold Clark Cup debut starts on February 17 and has their last game on February 23. It will be a quick three-game round-robin tournament with the winner taking home the trophy.

Ambassador @laura_woodsy sat down with all four managers today ahead of the #ArnoldClarkCup and asked them lots of questions ahead of the tournament, including some of yours.

Keep your eyes peeled for highlights over the coming week.

Your #Lionesses squad for the @ArnoldClarkCup…

The two players that should be talked about are Manchester City’s Lucy Bronze and Chelsea’s Millie Bright. Both players made the FIFPRO Best XI.

PHOTO: @Jodes_14 celebrates with @JillScott12 after giving #ENG the lead over #CAN. 2-0 #Lionesses pic.twitter.com/8sWAdBHjVt

However, it is important to note that since that FIFA Women’s World Cup victory over Canada in 2015 (the final score was 2-1), they have lost their last two matches against the Canadians. As the home team, England lost 1-0 in 2019 and most recently 2-0 in 2021 against Canada. England will feel like they have something to prove against Canada.

According to AiScore, England has six wins, three losses, and two draws against Canada. However, when counting the results with Great Britain, England/Great Britain has six wins, four losses, and three ties against Canada. Their new head coach, Sarah Wiegman became head coach late last year. She has been impressed with the team’s performances, especially the 20-0 win over Latvia according to BBC Sport:

“The most impressive thing was the 20-0,” Wiegman said. “It was 90 minutes of giving everything, keep doing the task, keep giving all the energy and playing well. That was so impressive.”

Bright was named captain of the Lionesses late last year.

Unfortunately for Canada, this matchup has been a lopsided one. The teams have faced each other eight times, with Germany winning six, and drawing and tying one time each against Canada. This is according to AiScore. This includes a 5-0 win over the Canadians in 2010. Within the last decade, both teams had three important games against each other. In the 2011 FIFA Women’s World Cup, Canada lost to Germany 2-1.

Since the 2016 Olympics, Canada and Germany faced each other twice, with Germany winning in both 2017 and 2018.

There is also a player named Selina Cerci, who currently plays for 1. FFC Potsdam. She has been given her first senior call-up in the Algarve Cup. This is what the German head coach said about Cerci according to deutscher fussball-bund.

“We have had our eye on Selina for a while, and have been following her development,” said Martina Voss-Tecklenburg. “She’s in good form and is playing at a consistently high level. Now, the time has come where we want to see her play for us.” After lengthy spells with injury, Sara Doorsoun and Nicole Anyomi (both Eintracht Frankfurt) have returned to the squad.

Unlike the two teams above, Canada has not faced Spain much. There have only been two encounters between the two teams. The last game was a draw in 2019 friendly.

The more notable game was in the 2017 Algarve Cup. Both Canada and Portugal made the finals in that competition. However, it would be Portugal that would lift the trophy in Spain. The Spanish, thanks to an early goal by Barcelona’s Leila Ouahabi, won the game against Canada.

This was in fact Ouahabi’s only international goal in 42 appearances internationally for Spain. She plays the left-back position for the Spanish and Barcelona. The other two players to mention are Barcelona’s Aitana Bonmatí and Alexia Putellas.

Putellas scored 23 goals in 93 appearances while Bonmatí scored 10 goals in 33 appearances for Spain. Both players were nominees for the 2021 FIFPRO’s Best XI nominees as midfielders. Even though both players did not make the FIFPRO XI, it shows the progress made in women’s soccer.

This was how Alexia Putellas was introduced as she won the 2021 Ballon D’Or Award according to Globe Soccer Awards.

“Yeah, the Barcelona and Spain midfielder underlined her status as one of the finest in the world, 27-year-old helped barca win the treble and scored 26 goals in 42 games overall including a penalty in the Champions League Final win against Chelsea.”

This is a really tough choice as Canada can finish anywhere from first to last. All teams are in the top ten and could all provide a challenge for the CanWNT. However, even with the recent improvements of the English and Spanish national teams, Canada is the reigning Olympic gold medalist for a reason.

The problem though is with Germany. They are ranked third in the world and did win gold in the Olympics in 2016. Also, after the U.S., the Germans are the most successful national women’s national team in the world. However, Germany has not faced Canada under the helm of Beverly Priestman. It will be an interesting game to watch.

This is what English coach, Sarah Wiegman said about the CanWNT according to TheBeanyMan:

“We know Canada did very well in the Olympics,” Wiegman said. “It’s a more direct game um a nice structure so so Beverly Priestman brought in a lot of structure in the game it’s as well as in possession as well as out of possession.”

What better way to get the ball rolling on the biggest year of women’s football in England than watching some of the best in action!