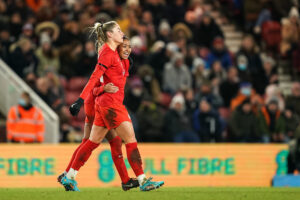 MIDDLESBROUGH, ENG – The CanWNT and the Lionesses (England) drew at Riverside Stadium. The English dominated the first half, however, the Canadians played better in the second half and even got a game-tying goal on the opening day of the Arnold Clark Cup.

The CanWNT gets a draw at Riverside Stadium

The #Lionesses were the better team but were unable to convert on their scoring opportunities.

The #CanWNT played better in the second half.#ForCanada’s Kadeisha Buchanan was the player of the game. #ENGvCAN | 1-1 | #ArnoldClarkCup

A mistake by Jayde Riviere early in the game led to a dangerous Lioness attack. England’s attack though was dealt with in the third minute. Kailen Sheridan gave up the ball in the 15-minute. Number 8 of England got a really good chance to score but it missed the net. Canada gave up the ball again in the 20-minute. Kadeisha Buchanan made a good defensive play in the 21-minute.

A stunning goal puts England up 1-0 in their first match of the Arnold Clark Cup.

Centre-back and FIFPRO player from Chelsea, Millie Bright, scored the opening goal (link for English viewers) after a set-piece. Sheridan did not have many options to clear the ball. However, the Bright goal still required a lot of skill to pull off to give England the lead over the CanWNT. Alessia Russo’s shot was deflected in the 26-minute.

Buchanan cleared the ball in the 24-minute. Kadeisha Buchanan made two important blocks in the 35-minute. Jayde Riviere made a good cross in the 36-minute. Demi Stokes’ cross to Alexia Rosso almost ended in the back of the net. Ashley Lawrence made a good play and stole the ball in the 41-minute. Buchanan with another foot to the ball prevented another attack in the 41-minute. On the left side, the English intercepted another Canadian ball. As a result, Hemp almost scored in the 44-minute.

Ashley Lawrence committed two fouls to start the second half. Jessie Fleming tried to find Janine Beckie in the 53-minute.

55’ A look at #CanWNT’s Janine Beckie and her terrific goal to tie the game in the second half! #AttackingThird#ENGvCAN | 1-1 | #ArnoldClarkCuppic.twitter.com/9KPpsf9Pn4

It was a great set-up and came from an English turnover. There was some great passing as Jordyn Huitema passed the ball to Janine Beckie. Beckie might have scored the goal of the Arnold Clark Cup (link for English viewers). Her shot was fantastic and it only found the top corner of the net.

Sheridan made a good save in the 58-minute. Canada had trouble clearing the ball, and Bright’s shot was off-target. Deanne Rose and Nichelle Prince used their speed in the 61-minute to create a corner for the CanWNT. However, there was an unfortunate injury as Jayde Riviere had to leave the game and was replaced by Cloé Lacasse.

Lionesses Beth Mead’s got a shot in the 72-minute. The CanWNT’s Beckie lost possession of the ball. Kadeisha Buchanan made a terrific defensive play and Desiree Scott cleared the ball. Jessie Fleming made a well-timed tackle in the 84-minute. Nichelle Prince had a chance in the 88-minute but was unable to convert. Stanley’s shot in the 90+2-minute of play was saved easily by Sheridan. Vanessa Gilles cleared the ball in the 90+3-minute. Ashley Lawrence then made a critical tackle in the 90+4-minute.

This is what Janine Beckie said about the draw with England in the Arnold Clark Cup according to Canada Soccer:

“Half of our team is in their offseason and we played against a team that is full of players in their season so I think we can be really proud of the performance. This was the first game of the tournament, and we have a lot to build on.”

It is important to note that the NWSL season starts on March 19, while many of the English players are already playing professionally. A big reason for that is the FA Women’s Super League is in the middle of their regular season.

On another note, this also extends Canada’s unbeaten run to three games against England. One can say four when including the draw in the Summer Olympics against Great Britain. What was impressive was that all three games were played in England and that the Canadians won the other two games on the road. The last time Canada lost to England was in the quarterfinals of the 2015 FIFA Women’s World Cup.

The CanWNT will next play on Sunday at 3:00 p.m. ET against Germany while England will also play Spain on Sunday. Both games will be televised nationally on TSN.

Three Takeaways from the draw at Riverside Stadium

“I’m really proud of the group. Second half was much better – much more like us and our tempo.”#CANWNT pic.twitter.com/wi93bB6Jfv

The CanWNT gave up too many turnovers. This was more apparent in the first half than the second half. Jayde Riviere and goalkeeper Kailen Sheridan gave up the ball too cheaply very early in the game. They were fortunate that England did not score more than one goal in the first half.

The substitutions in the second half worked. The midfield was struggling and England was in control of the game offensively. Beverly Priestman did a good job with her substitutions For example, bringing in players like Deanne Rose and Nichelle Prince brought in speed that England had difficulty dealing with. Quinn also provided some needed stability at the midfield for the CanWNT.

Kadeisha Buchanan was the player of the game. The reason why Canada earned the point was because of Buchanan. Yes, Beckie was the one who scored the goal. However, Buchanan made big plays throughout the game. The one moment that stood out was in the first half when Buchanan made two big blocks in the 34-minute and made an important play late in the game with the help of Desiree Scott to keep the game level.

The post The CanWNT and England drew at Riverside Stadium appeared first on Last Word On Soccer.