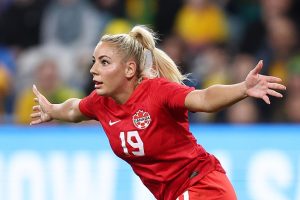 ANALYSIS – The CanWNT 2022 year review started off with the team struggling to score goals. However, as the year progressed, the team gelled and they started to score goals and find results. It just shows that playing games regularly is important for building a competitive team in the FIFA World Cup next year.

The CanWNT 2022 Year Review: A Memorable Way to End It

Player of the Year in the CanWNT 2022 Year Review: Adriana Leon

The big reason for the turnaround was Adriana Leon. Yes, she did not earn a goal or an assist in her first five games. However, she started to find a rhythm for herself after earning an assist against Costa Rica. Since then, she had scored five goals and earned one assist. It was where four of those five goals came from though that was really impressive.

@CANWNT take the lead courtesy of an absolute rocket from Adriana Leon!

She scored three goals in one week in Australia against the Matildas. Two of those goals were game-winners and it gave Canada a much-needed confidence boost. Then in November, Leon scored one of the two goals as they won in Brazil 2-1. The game to highlight was probably her Australia game. Her first goal in the first game against Australia in particular was spectacular and it set the tone of the game. It was also a game that Canada would eventually win 1-0.

Also, a big shout out to Kailen Sheridan, who just missed out on being named Player of the Year with her fantastic performances.

Games of the Year – The Two Wins Against Australia

There were probably two, but it was the same theme. Canada lost to the USWNT in the Concacaf W Championship Final and had trouble getting results against big teams. Yes, the CanWNT defeated Germany earlier in the year, but a lot of their players were absent as they tested positive for COVID-19.

The wins against Australia though changed the tone for the team. Before then, Canada had not pulled off an impressive win over a top-quality side. Yes, they beat Germany early in the year, but many of their players were missing because of COVID-19. However, all the games played at the start of the year were a big reason why Canada did so well in those two games.

Defence and Goalkeeping Has Been Solid

Besides the Nigeria game in Starlight Stadium, where defensive and goalkeeping mistakes were made, all the other games showed what Canada was best at. With the exception of that Nigeria game, Canada did not give up more than one goal in the entirety of 2022. That is a remarkable stat for Canadians to remind themselves of.

For example, in that 1-0 loss to Spain, the game should not have been so close. It was only because of the tremendous defence by Canada that Spain only scored one goal. This was especially true for Kadeisha Buchanan, who made some great defensive plays in that game. Similarly, they were dominated by the USWNT, but only lost that game 1-0 thanks to the great goalkeeping of Kailen Sheridan.

The greatest strength of the CanWNT is keeping the games close against top-notch sides, even if they are outplayed. That is a strength not many teams around the world have. It was a big reason why they won Olympic Gold last year and their draw against England earlier this year shows that they can fight back.

DENIED AT THE DEATH!

Then there was the goalkeeping. Kailen Sheridan made some big saves for her national team. She preserved the 2-1 win by making a fantastic save on Samantha Kerr. She would also make some fantastic saves and keep her team in the game where they lost to the U.S. 1-0.

The Chemistry is A Big Reason for Their Recent Success

The more these players played with each other, the more the fans can see the players getting more comfortable with each other. This was seen early on with Christine Sinclair and Janine Beckie in the first Nigeria game where they won 2-0.

The Concacaf W Championship was probably the tournament that helped though. In those games, it was about learning to take advantage of scoring opportunities. They struggled on this initiative in the first half against Trinidad and Tobago. However, the more the team played, the better their performance.

This resulted in two earned wins against Australia and one earned win against Brazil. They also beat Argentina 2-0 and also Morocco 4-0. Morocco is in the FIFA Women’s World Cup, which shows that Canada is a very competitive team.

Scoring Goals Was a Problem Especially Early in the Year

The one game that defined these problems was the home game at BMO Field against South Korea. They had 13 shots to South Korea’s three but were unable to find the back of the net. Yes, the South Korean goalkeeper made a big save late in the game, but Canada was not ruthless enough in the attacking third in that match.

Another example was against Nigeria at Starlight Stadium. Canada had 19 shots, but only five of them were on target. They also had problems scoring early in Concacaf World Cup qualifying against teams like Costa Rica and Panama, in the FIFA World Cup qualifying campaign.

There is Less Margin for Error with the CanWNT

That is not necessarily a bad thing, as Canada does not need to be dominant like the USWNT and England teams or like Sweden was in the 2020 Tokyo Olympics. It does though mean that a weaker national team can get a result against Canada.

Examples of this include getting a scoreless draw against South Korea at BMO Field and a 2-2 draw against Nigeria at Starlight Stadium. Additionally, Nigeria will be one of the teams Canada will need to face in next year’s FIFA Women’s World Cup.

Read More: The 2021 CanWNT Year Review – The Best Year Ever

CanWNT 2022 Year Review: A Year That Finished off Strong

The way Canada ended the year is a big reason for the high grade. To win five of their last six games of the year will do that. This is especially true when the team won two games in Australia and one of their two games in Brazil. These are two quality sides that can trouble even the best teams in the world and doing it on the road means something. Normally, the grade should be given a B+. However, since there is going to be a professional women’s soccer league in Canada, the grade has been upgraded to an A.

There should be optimism surrounding the team as they get ready for the year 2023. In that year they have the FIFA Women’s World Cup and also the Summer Olympic qualifiers against Jamaica. They have also been invited to play in the SheBelieves Cup in the U.S. against the USWNT, Brazil, and Japan.

The post The CanWNT 2022 Year Review: A Year That Finished Off Strong appeared first on Last Word On Soccer.