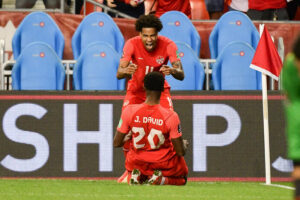 ANALYSIS – The CanMNT won big thanks largely to a fantastic start to the game. They scored two goals within 11 minutes of the game. They would add on a second-half goal and take all three points at home against El Salvador, also known as La Selecta. Buchanan and David played well, but there were also other players that played well like Richie Laryea and Atiba Hutchinson.

A positive start played a pivotal role with the #CanMNT getting the win.

Canada’s defence played well, preserving a clean sheet.#LaSelecta had seven shots, but none of the shots were on target.#CANvSLV | 3-0 | #CWCQ

This was a terrific team play. It all started with Jonathan Osorio winning the ball in the middle of the park. He then passed the ball to Junior Hoilett. Then, the great team passing between four CanMNT players takes place. Hoilett passes the ball back to Osorio, who passes the ball straight to Laryea. He then found Canadian veteran and captain Hutchinson, who scored the opening goal.

11′ What a start by the #CanMNT! Jonathan David gets off a terrific header off from a Tajon Buchanan cross!#CANvSLV | 2-0 | #CWCQpic.twitter.com/3F9FBWbuZx

This was a heads-up play by Steven Vitória, to keep the ball in play. As a result, Tajon Buchanan delivered a great cross to Jonathan David, who put the ball into the back of the net. El Salvador would eventually get more possession in the first half. However, Canada defended well enough to get the clean sheet against El Salvador.

With the notable exception of the game against Mexico in the Concacaf Gold Cup, the CanMNT has not given up more than one goal in competitive Concacaf matches this year. This is a pretty big deal considering that defence is supposed to be a weakness on the men’s side.

The first example was Hutchinson, who cleared Bryan Tamacas’s pass out of Canada’s own box in the 28-minute. In that same minute, Junior Hoilett deflected the shot from a dangerous position. Then in the 30-minute, Laryea made the shot hard for Tamacas. As a result, Tamacas shot the ball wide and off-target. The last great defensive play that will be highlighted in the first half was Vitória. He quietly had a good game. With his body, he was able to deflect Enrico Dueñas shot, which resulted in a La Selecta corner.

Thoughts on the #CANvSLV game:

Tajon Buchanan and Jonathan David were involved in two of the #CanMNT‘s three goals.

Richie Laryea made the defensive play of the game in the 68-minute.

There were a few examples of great defensive plays by Canada. In the 68-minute for example, Laryea made a terrific defensive play and might be the play of the game. He got on the wrong side of the El Salvador player and kicked the ball out of play for a corner.

Alistair Johnston intercepted an El Salvador pass in the 75-minute. In that same minute, he intercepted the ball and passed it to Vitória. Both Vitória and Laryea dealt with the ball and both players also played very well defensively against El Salvador. Their good defensive play and also El Salvador not capitalizing on their chances led to a 3-0 CanMNT victory.

El Salvador failed to take advantage of their scoring chances

El Salvador had seven shots and zero shots on target. That must be a concern for them going forward. A few of them were in hard positions to score though like Alexander Larin’s shot in the 26-minute. There was a chance just before that, where an El Salvador player was unmarked but was unable to control the ball.

There were other chances to score or at least put a shot on target. Larin of La Selecta for example got a very weak shot off that did not even get past the Canadian defence. Admittedly, it was not a good angle, but it is one that should have been a shot on target. All in all, El Salvador was unable to capitalize or generate any scoring opportunities.

59′ #CanMNT scores another! Jonathan David creates a turnover and passes the ball to Tajon Buchanan, who puts the ball into the back of the net!#CANvSLV | 3-0 | #CWCQpic.twitter.com/Gvn0bFwEbx

Buchanan and David’s performances were fantastic against El Salvador. David intercepted the ball from Toronto FC and El Salvador player Eriq Zavaleta. He could have shot the ball but instead passed it to Buchanan. Credit should also be given to Buchanan, whose shot went past La Selecta goalkeeper Mario Gonzalez and sealed the game for Canada.

These two players also had some other chances in the game.   For example, Buchanan got past a defender and tried to get across. It went straight to a La Selecta player. Then in the 76-minute, David almost drew a foul and a penalty in the 76-minute. This in addition to the second goal scored in the 11-minute shows how valuable both players are on the team.

Game is Over:@CanadaSoccerEN 3@LaSelecta_SLV 0#CanMNT wins for the first time in the final stage of World Cup qualifying since June 1, 1997, when they defeated Costa Rica at #CommonwealthStadium in Edmonton, Alberta.

The CanMNT won big, and offensively, most of that had to do with David and Buchanan. The first goal though shows that Canada has multiple offensive weapons. Laryea, like Buchanan, has a lot of speed and can generate opportunities for their teams. Osorio is a valuable midfielder who can make plays and Hutchinson stepped up yesterday.

This is the first win in the final stage of the World Cup qualifying for the CanMNT since June 1, 1997. In that game, they defeated Costa Rica 1-0 at Commonwealth Stadium in Edmonton, Alberta.

The second window of World Cup qualifying for both teams starts on October 7. El Salvador will host Panama at 10:05 p.m. ET. This is while Canada will play on the road at Estadio Azteca against Mexico at 9:40 p.m. ET. The CanMNT game will be shown on OneSoccer, Sportsnet, and RDS.

The post The CanMNT won big in 3-0 win over El Salvador at BMO Field appeared first on Last Word On Soccer.