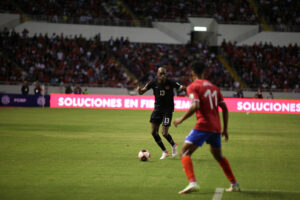 San José, Costa Rica – The CanMNT suffers first loss of World Cup qualifying. The CanMNT had a golden opportunity to punch their ticket to the 2022 FIFA World Cup in Qatar but fell to Costa Rica 1-0.

A tight physical first half

The first couple of minutes were pretty dicey and physical as both teams were looking to take control of the game. Costa Rica earned the first corner of the game in the second minute but it was headed out of danger. Canada was trying to press early and force a turnover on the Costa Rica defence.

Through 15 minutes of play, Canada had yet to register a single shot on goal and they seemed on the backfoot despite trying to apply more pressure. In the 17th minute, we had a bit of drama as off a foul the ref went to VAR to check for a potential red card on Mark-Anthony Kaye and after review, it wasn’t shown.

Things got controversial in the 34-minute as Kaye was shown a red card after he was taken down got back up and shoved Johan Venegas to the ground and Canada was reduced to 10 men. Costa Rica got its first shot on target in the 38-minute from distance but Milan Borjan made his first big save.

Costa Rica opened the scoring in the first minute off added time to the first half as Celso Borges was able to head in a ball past Borjan into the back of the net to give them the 1-0 lead. The first half finished with Canada down by one and 45 minutes to try and come back and win the game or try and salvage a draw.

Canada throws everything at Costa Rica

Costa Rica looked hungry for me and three minutes into the second half Borjan was put into action as he made another save on Bryan Ruiz. Canada was almost down by two as in the 52nd minute as Joel Campbell found himself one on one with Borjan but the keeper was able to keep the ball out.

Canada started to press looking for the equalizer but this time it was Costa Rica with the counter attacks looking to put Canada away with an insurance goal. Jon Herdman made his first chance of the night in the 63rd minute bringing in Junior Hoilett for Alistair Johnston.

Canada had a great chance in the 72-minute but Tajon Buchanan’s ball rang off the crossbar and managed to stay out as they kept attacking looking for the tying goal. Herdman made two changes in the 79-minute bringing in Ike Ugbo for Cyle Larin as well as bringing in Ismael Kone for Jonathan Osario.

Jonathan David was THIS close to tying the game.

Canada fired another shot on target as Richie Lareya powered a shot right into Keilor Navas’s hands and off the rebound Hoilett had a chance to put it away but missed. They had another amazing chance in the 88-minute but Jonathan David’s header rang off the post and stayed out.

Canada had one final chance with a last-minute free-kick as David was taken down and the ball went right into the wall and the final whistle blew and Canada’s unbeaten streak in world cup qualifying had come to an end.

What is next for the CanMNT?

They will be back in action on Sunday in Toronto at BMO Field when they face Jamaica with another chance to book their ticket to Qatar. The game on Sunday will be televised nationally on Sportsnet and it will also be shown on OneSoccer at BMO Field, It will take place in Toronto, Ontario at 3:05 p.m. ET.