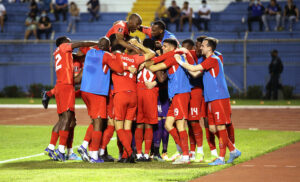 The CanMNT secured a historic win against familiar foes Honduras

Full Game Summary:#CanMNT goalkeeper Milan Borjan was the player of the game.#ForCanada’s defence played well in the first half.

The counterattack and skill level of the offensive players for #TeamCanada helped secure three points against #LaH.#HONvCAN | 0-2 | #CWCQ2022

Honduras got the first scoring chance of the game less than 90 seconds in and with the ball bouncing around the box, Canada was able to clear the ball out of danger. Canada got its first real chance when it earned a corner in the seventh minute but the Honduras goalkeeper was able to make the save.

10’ Own goal scored by #LaH’s Denil Maldonado! However, the goal was scored because of the brilliant play of #CanMNT’s Tajon Buchanan!#HONvCAN | 0-1 | #CWCQ2022pic.twitter.com/cg3C8MEJBz

The CanMNT scored in the 10-minute when Tajon Buchanan with an amazing dribble past the Honduran defence and was able to cross the ball which went off a defender and into the back of the net for the 1-0 lead. Buchanan had a great chance in the 22-minute with a shot on target but it rolled into the hands of the keeper.

Things got heated a couple of minutes later when Buchanan was taken down and a scrum ensued between both teams but cooler heads prevailed. In the 36-minute, Samuel Piette was taken down and the ref went to VAR to check for a red card and upon further review, it was not shown.

Canada made its first change of the game in the 38-minute as Piette came out due to injury and was replaced with Liam Fraser. Romell Quioto had a great chance for Honduras on Milan Borjan who came out and managed to make a great save blocking the shot in a one-on-one situation.

Three minutes were added on and in extra time Honduras got a dangerous chance to tie the game but Borjan again came up with a huge save and Steven Vitoria managed to kick the ball out of danger. The first half finished with the visitors up 1-0.

The CanMNT secured the win

The second half was a tight competitive battle and in the 55-minute, Jonathan David had a great opportunity but failed to beat the keeper who came up with another big save. Borjan was doing a good job preserving Canada’s lead and made a stunning save in the 59-minute.

John Herdman made his second change of the game in the 60-minute bringing in Jonathan Osario for Junior Hoilett and Cyle Larin for Richie Laryea. Osario had his first opportunity in the 63-minute but was taken down in the box and upon further review, the ref didn’t call a penalty.

Borjan again in the 70-minute denied Honduras once again with a diving save to keep the ball out of the net and Canada was barely hanging on. David doubled Canada’s lead in the 73-minute when he managed to get onside one on one with the keeper and beat him with a great lob to make it 2-0.

In the 80-minute, Canada made another change subbing David out for Lucas Cavallini, and had a chance right away as he crossed a ball across the net as Buchanan tried to head the ball into the back. Five minutes were added on to the 90 and Borjan once again shut the door.

The final whistle blew and Canada remained undefeated in qualifying and secured their first win in Honduras in 38 years. Canada will be back in action on Sunday in a pivotal game against the US at home in Hamilton at Tim Hortons Field. The game will kick off at 3:00 p.m. ET. Canadians can watch the game nationally on Sportsnet and it will also be shown on OneSoccer and Telus.

The post The CanMNT secured a historic win over Honduras appeared first on Last Word On Soccer.