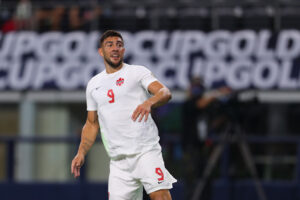 The CanMNT roster was revealed this afternoon. It is a very strong roster with both FC Bayern Munich player Alphonso Davies and Vancouver Whitecaps FC player Lucas Cavallini on the roster.  These players will play against Honduras, the U.S., and El Salvador in early September. The first octagonal game will take place on September 2 at 8:05 p.m. ET against Honduras.

The CanMNT is looking to make history and qualify for the men’s world cup for the first time since 1986. Looking at the roster, some of the names that pop up are Jonathan David and Cyle Larin. Both strikers will be important for Canada’s success in their qualifying campaign. Also, it is important to note that Lille OSC player Jonathan David and Beşiktaş J.K. player Cyle Larin won titles with their respective clubs in Europe. Canada also has CF Montréal player Kamal Miller who played very well for Canada when Davies was injured in the 2021 Concacaf Gold Cup.

This is probably the best the CanMNT could hope for. In particular, Davies and Vancouver Cavallini being on the roster should make Canadian fans ecstatic. There was a worry last month that both players will not be available due to injuries.

Also, Beşiktaş J.K. player Atiba Hutchinson makes his return to the CanMNT. The veteran midfielder has been in countless World Cup qualification cycles. The midfielder will be relied upon to provide leadership and quality to the CanMNT to a talented but very young squad.

Other Players Worth Mentioning

The other players worth mentioning on the roster are Steven Vitória and Tajon Buchanan. Vitoria plays for Moreirense F.C. in Portugal and is Canada’s best centre-back. This is while New England Revolution player Tajon Buchanan will start to play for Club Brugge KV next January.

There is also Red Star Belgrade goalkeeper Milan Borjan. Borjan has played for CanMNT since 2011 and has been the backbone of his team’s defence. His leadership and presence will be felt in the Octagonal qualifiers. One player that will be mentioned but is unlikely to play is James Pantemis. Pantemis is the current goalkeeper for CF Montréal.

He is the only player on the roster to have played in the Canadian Premier League. He played with Valour FC in the 2020 CPL season. Lastly, Junior Hoilett, who plays for Reading in the EFL Championship is an excellent player in Concacaf. He scored one of the two goals against Costa Rica in the 2021 Concacaf Gold Cup.

Players Missing from the CanMNT Roster

My understanding is the Arfield exclusion was a #canMNT decision, and not one made by the player. The preference was to go w/ the players who played through Spring/Summer. The group is tight-knit and deserve spots in the squad. Arfield remains available/willing for future windows

The two notable absentees include Ayo Akinola and Rangers midfielder Scott Arfield. It is no surprise that TFC striker Akinola is not on the roster as he got injured in the 2021 Concacaf Gold Cup and will not play another game this year. Arfield though was one player CanMNT fans thought could make the roster. However, it turns out that Arfield was not chosen by the CanMNT. This decision might disappoint CanMNT fans, but it shows the depth Canada has in the midfield positions.

The most notable midfielder is F.C. Paços de Ferreira player Stephen Eustaquio, who was probably Canada’s best player in the 2021 Concacaf Gold Cup. They also have other midfielders from MLS like Jonathan Osorio, Alistair Johnston, and Mark-Anthony Kaye. Lastly, they also have youngster Scott Kennedy who currently plays for SSV Jahn Regensburg in Germany. If one looks at it this way, it is not too surprising that Arfield did not make the team.

This is not to say that Arfield will not play for Canada again. A big part of why he is not playing in the team is because of his absence in the other stages of World Cup qualifying and the Gold Cup. Arfield could not play in the 2021 Concacaf Gold Cup because of injury.

The CanMNT kicks off their final round of qualification against Honduras at 8:05 p.m. ET. The game will take place on Thursday, September. 2. They will then travel on the road to Nashville at Nissan Stadium to face the U.S. at 8:00 p.m. ET on Sunday, September. 5. Finally, they will close their first window of World Cup qualifying, which will again take place at BMO Field.

The post The CanMNT Roster was Revealed – Analysis appeared first on Last Word On Soccer.