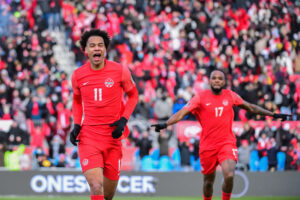 TORONTO, ON – The CanMNT qualify for the 2022 FIFA World Cup. This is the first time Canada qualified for the FIFA World Cup since 1986. They dominated the game from beginning to end against Jamaica.

The CANMNT qualify for the 2022 FIFA World Cup

Three Keys to the Game:

The #CanMNT had most of the scoring opportunities.#ForCanada won the midfield battle. #ReggaeBoyz only had one shot on goal.#CANvJAM | 4-0 | #CWCQ2022https://t.co/2OwaJi45V8

The CanMNT had some good chances to score to begin the game. Jamaica countered, but Canada played good defence. Adekugbe’s pass was intercepted by Jamaica. Cyle Larin had a glorious chance to take the lead in the fourth minute, but his first shot was stopped by Andre Blake. Jonathan David with a terrific run.

Larin’s shot in the sixth minute was easily stopped. Adekugbe playing well, putting pressure on Jamaica like in the eighth minute of play. Good CanMNT interception in the midfield in the ninth minute of play. Jonathan Osorio made a good defensive sliding play for TFC.

13’ The #CanMNT scores! Cyle Larin puts himself in a good position and receives a terrific pass from Stephen Eustáquio to put the ball into the back of the net! #CBSSportsGolazo#CANvJAM | 1-0 | #CWCQ2022pic.twitter.com/LJSXAUqJas

A nice set-up by Junior Hoilett and a terrific pass by Stephen Eustáquio leads to a goal by Cyle Larin. This was Larin’s sixth goal in the Octagonal. Jonathan David almost scored in the 15-minute, but just missed the net. Javain Brown made a good defensive play for Jamaica.

Osorio made a terrific pass to Buchanan, but he could not control the ball in a dangerous area. Larin missed the net in the 38-minute, almost went into the back of the net. Samuel Adekugbe made the incredible pass to Larin for the chance to happen. Samuel Adekugbe made a terrific run in the 39-minute. He collided with Javain Brown. However, both players would be fine.

Milan Borjan made a solid save in the 32-minute and stopped Daniel Green’s shot.

The pressure kept mounting and Jamaica felt the pressure. Tajon Buchanan scores from very close range following a set-piece to end the half in comfortable position.

Cyle Larin’s pass was dangerous. Larin’s pass to David, almost went into the back of the net. They had another chance, which included Lucas Cavallini, but Jamaica defended it well. Junior Hoilett shot in the 55-minute was close, but just missed the target. Buchanan had a chance in the 72-minute but was unable to control the ball.

82’ The #CanMNT are going to the #FIFAWorldCup! Junior Hoilett got a terrific pass from Buchanan and puts the ball into the back of the net! #CBSSportsGolazo#CANvJAM | 3-0 | #CWCQ2022pic.twitter.com/TTmLwFo3b0

Buchanan and Hoilett link up and Hoilett scores. Canada would add another as the game ends 4-0 over Jamaica.

Jamaica’s last game will be at home against Honduras at 9:05 p.m. ET. This is while the CanMNT will play in Panama at 9:05 p.m. ET on March 30. The game against Panama can be seen nationally on Sportsnet and also be seen on OneSoccer.

Three Takeaways from the Historic Victory

Game is Over: @CanadaSoccerEN 4@jff_football 0

Most fans in CanMNT history in Toronto. Gareth Wheeler of OneSoccer mentioned that this is the first time a CanMNT game sold out in Toronto, Ontario.

The post The CanMNT qualify for the 2022 World Cup with a 4-0 win appeared first on Last Word On Soccer.