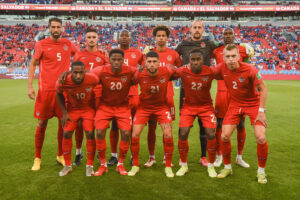 Lille OSC player Jonathan David is in good form. He has scored four goals in eight games. Most notably, there are four names that CanMNT fans were concerned may not play in this window. These players are Red Star Belgrade’s goalkeeper Milan Borjan, Vancouver Whitecaps FC forward Lucas Cavallini, and Beşiktaş J.K. players Cyle Larin and Atiba Hutchinson.

Of the four, Borjan is the most important as he is one of CanMNT’s longest-standing players. Hutchinson is also valuable for his leadership and Larin is one of the many players rising in the CanMNT system along with players like David and FC Bayern Munich’s Alphonso Davies. Lastly, Cavallini has historically played well for Les Rouges, scoring 16 goals in 27 appearances.

New or Returning Players in the October Window

Nova Scotian’s own Jacob Shaffelburg made the roster. He has only played one game previously with the CanMNT in 2020. In 2021, forward Shaffelburg is emerging as one of TFC’s best players in the last few games. It is deceptive to only look at his MLS play this year as he has only three goals and two assists. This is because most of his production came in the last few games.

He has starting to score with two goals in the last four games. However, the biggest danger Shaffelburg provides the CanMNT is his ability to create quality crosses. For example, in the York United FC game, Shaffelburg created quality cross passes that ended up with the first two TFC goals in the Canadian Championship. The best one might be the one above. Shaffelburg delivered a terrific cross pass to Marky Delgado. Delgado then put the ball into the back of the net.

Shaffelburg will most likely be a backup in all three games. If CanMNT needs to make a substitution, he will be one of the players to come from the bench. Another player to highlight is Zachary Brault-Guillard.

89′ Fantastic teamwork by #CFMTL leads to a Ballou Tabla goal, who scores with a terrific shot! The goal was assisted by Zachary Brault-Guillard.#HFXvCFM | 1-2 | #CanChamp pic.twitter.com/2XZErmSz1O

Names Canadians might be familiar with are FC Basel’s Liam Millar and Vancouver Whitecaps’ Derek Cornelius. Cornelius currently plays for the Vancouver Whitecaps but has been loaned to Panetolikos. This is what CanMNT head coach John Herdman said about Liam Millar, who is playing well in the Swiss Super League with Basel according to CPL Soccer.

“Liam Millar, who’s been part of our program um and we’ve been waiting for him to get this consistent run of form at a big club like Basel.”

Lastly, there is also Charles-Andreas Brym, who currently plays for FC Eindhoven. The forward has played three games for Canada, including scoring a goal against Barbados in a 4-1 friendly victory. It is also important to note that Scott Kennedy, who was with the team on the September window did not make the October roster.

Our #CanadaRED fans are the difference makers

This is larger than the 23-man roster CanMNT had in September. A part of that might be the limited availability of Borjan, Larin, and Hutchinson and Vancouver Whitecaps FC player Lucas Cavallini. This may give players like Schaffelburg more playing time. Also, Junior Hoilett, who plays for Reading in England will not play in Mexico because of the country being on the red list. Herdman said that this Gold Cup will be complicated for a variety of factors on CPL’s YouTube account.

“The referee in the first game happens to be the referee who dished out 11 (yellow cards) in the first game of the gold cups so it’s going to be a wild window but you know what it offers Neil is as you’ve sort of opened to there is these young players who are in good form you know players.”

It is important to note that Herdman just before the quote talked about the CanMNT having five yellow cards. If one of those players gets another yellow card, they will miss the next game for the national team.

Many of the players listed in the CanMNT October roster window were also in the September window. With the yellow cards, it is going to be unpredictable who Herdman has on his roster. Certainly having three injured players and one who currently has COVID-19 will add to that unpredictability.

It is important to note that Canada only has one home game in this window. That is on October 13 against Panama at BMO Field. The game will take place at 7:30 p.m. ET. They also have games on October 7 in Mexico and October 10 in Jamaica.