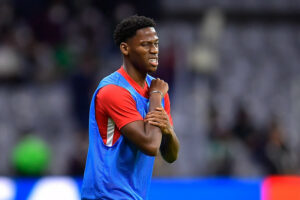 PREVIEW – The CanMNT looks to continue their strong performance on the road against Jamaica. They got two draws against arguably the two best teams in Concacaf. However, Canada still has a long way to go but it looks encouraging.

They are currently third in the octagonal round of World Cup qualifying. Moreover, they are only one point clear of Panama and El Salvador. With the road games against USA and Mexico out of the way, Canada can now focus on potentially creating a gap between themselves and all the other teams below them. This is what goal scorer in Mexico Jonathan Osorio said about the game according to OneSoccer:

“This team just keeps growing we keep growing and this was our biggest test yet and we faced it. I think with fine colours but we wanted to win that game. I think we’re gonna take the point, but we know that we could have played better in the second half and we felt that you know we should have taken three points from today.”

Canada become just the 10th team to come away from Mexico City without losing a World Cup qualifier.

Mexico have been playing World Cup qualifiers in Mexico City since 1934.

The fact that CanMNT felt like they should have gotten three points in Estadio Azteca should scare the rest of Concacaf. Furthermore, Canada scored for the first time at Estadio Azteca since 1980.

Canada is currently on a high, while Jamaica is currently on a low as they sit at bottom of the table. The only result they got was a 1-1 draw in Costa Rica. Now, facing Canada, Jamaica will need a terrific performance to pull out the win. Reggae Boyz head coach Theodore Whitmore said this after their 2-0 loss on the road against the U.S. according to KVUE.

“Pretty decent performance from the Jamaica team but time I think after we conceded in the first half early minutes I think we lost our discipline and it was a hopeful battle for us.”

Jamaica will need to play a perfect game to get a win. Can they do it? Possibly, if they manage to adjust their play by limiting their mistakes against Canada.

For Canada, they will miss three players, Richie Laryea, Steven Vitória, and Tajon Buchanan. Even then, Jamaica will still have trouble, especially with not having their two best players Michail Antonio and Leon Bailey, who both play in the Premier League. A player to watch for the Canadians is Shamar Nicholson, who scored two goals in the Octagon.

Jamaica will give a good fight and might trouble Canada a bit. However, Canada, with players like Alphonso Davies and Jonathan David, will give Jamaica a hard time. Lastly, there will not be any fans allowed in Kingston, Jamaica, according to Alistair Corp of Covers, which works in Canada’s favour.

The game kicks off at 6:00 p.m. ET at Independence Park in Kingston, Jamaica. Fans can watch the game nationally in Canada on Sportsnet and also available on OneSoccer.

The post The CanMNT looks to continue momentum in WCQ at Independence Park appeared first on Last Word On Soccer.