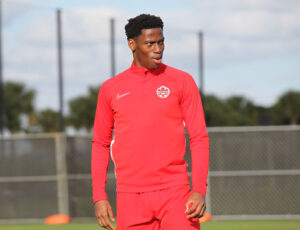 PREVIEW – It has been an amazing time as the CanMNT looks to clinch the 2022 World Cup spot. However, they will face a Costa Rican side desperate for points on Thursday night at Estadio Nacional de Costa Rica.

CanMNT could clinch the 2022 World Cup spot on Thursday

#CANMNT continues their pursuit for #Qatar2022!

The CanMNT has been on a tear since last year. They never lost a World Cup qualifying match and could achieve something historic. The last team to be unbeaten in the final stage of World Cup qualifying was Mexico in 1998. This confidence can be seen with the group, including CanMNT Liam Fraser according to Neil Davidson of The Canadian Press:

“Without a doubt,” he said. “I think we have the individual players but furthermore we have the collective mindset and the collective synergy that allows us to go and beat any team on our day. The level that we’ve gone to under John has truly shown us and shown everyone how much of a top team we are.”

Canada is the most improved team in 2021. They went from being ranked 72 to 33 in just one year for men’s soccer. Lastly, in the final round of World Cup qualifying, Jonathan David and Cyle Larin lead in Concacaf with five goals each.

Estadio National in San José will be an intimidating atmosphere for the CanMNT. The game will take place in San José, the capital and largest city in Costa Rica. This is what Costa Rica head coach Luis Suárez said according to Marcial Martinez of Futbol Centro America via a translator:

“I do not accept and here I want to make a request, is that they stop wanting the Costa Rican National Team not to reach the World Cup, “

At the end of 2021, the chances of qualifying for Costa Rica looked bleak. In the last window though, they were able to turn it around. They got seven points, which included a critical home win over Panama.

They are only one point behind Panama for fourth place and four points behind the automatic World Cup qualifying spots. There is a lot to play for the Costa Ricans. They will depend on Bryan Ruiz, who is their leading goalscorer in the Octagonal with three goals.

Win and we’re in. A draw or loss could also see Canada qualify for the FIFA World Cup on Thursday, but ultimately we are in control of our own destiny and the goal is clear.

It will be more difficult for Canada to win without Alphonso Davies or Samuel Piette. The Costa Ricans, though, cannot underestimate the Canadians. Even without those players, Canada was able to get a win against the USMNT and El Salvador.

Saying that it will be hard for the Canadians against Costa Rica. The last time they defeated the Costa Ricans in Costa Rica was in 1993. The Ticos will also feel like they have something to prove after losing to Canada twice in 2021.

There is a chance Canada qualifies for the World Cup before the game. However, Panama would need to lose at home against Honduras, which seems unlikely to happen. The game will be televised nationally on Sportsnet and will also be streamed on OneSoccer.

The post The CanMNT looks to clinch 2022 World Cup spot against Costa Rica appeared first on Last Word On Soccer.